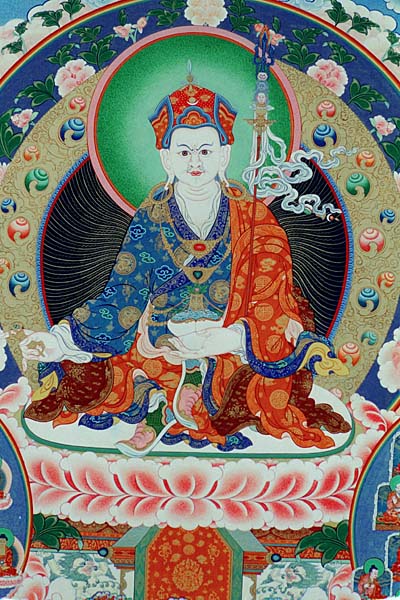 Padmasambhava is the Tantric Buddha – the second Buddha, who brought the teachings of the Nine Yanas of Buddhism to Tibet. He subdued all the negative forces which had caused obstacles to the establishment of the teachings in Tibet and founded the two sanghas: the red sangha of monks and nuns, and the gö-kar chang-lo’i dé (gos dKar lCang lo’i sDe), the white sangha or ngak’phang sangha of ngakpas and ngakmas.

The birth of Padmasambhava was predicted by Shakyamuni Buddha, who said:
Fifteen years after my death, one will come – a second Buddha – one with greater capacity than myself – one with the power to establish the teachings of Vajrayana in the world.

The red shawl draped over the shoulder of Padmasambhava communicates the enlightened confident relaxation of the Buddhas of the Tantras. His mere presence is that of perfect Damtsig. His blue upper garment announces his pristine open view, which is that of Dzogchen. The gold ornaments are symbolic of empowerment. He wears them with unpretentious opulence, demonstrating the vast wealth of realisation which he shares.

In his extended hand he holds a vajra which he wields with passion and precision to overcome all obstacles to the transmission of realisation for sentient beings. The skull cup contains the vast ocean of wisdom and a long-life vase, which shows us that the natural awareness of non-dual mind is deathless – extending beyond all conceptual contrivances such as measure and chronology. He cradles the khatvangha trident in the crook of his left arm. The three points of the khatvangha pierce the fabric of attraction, aversion and indifference. The secret nature of the khatvangha is Yeshé Tsogyel – his secret inner wisdom nature. Here we see the Buddha of our Age.