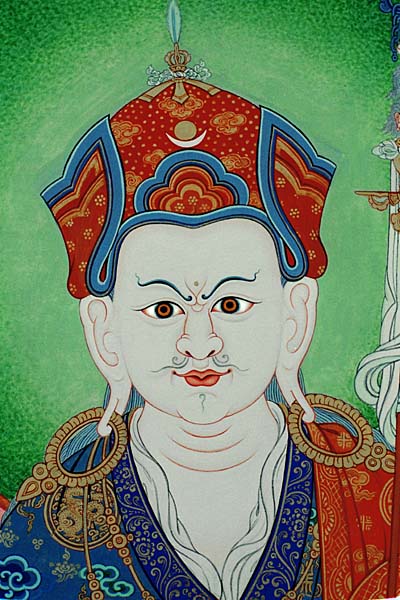 Padmasambhava from the Düd’jom Lineage Tree

In this final close-up of the central figure, we come face to face with the unmistakable gaze of Dzogchen – eyes open, unmoving, focused in space, wholly appreciative of phenomena. Padmasambhava is free from any mark or sign of contrivance – he is focused fully on the compassionate openness which constantly manifests method to benefit all beings in all places and times. On his head he wears the Ögyen Pèdzha – the crown which was given to him by the King of Zahor, Arshadhara. The King had a daughter called Mandarava who had all of the signs of a dakini. Padmasambhava took Mandarava to be his consort in accomplishing immortality – the state beyond the figmental illusion in which birth and death seem separate and contradictory.

After practising in the Maratika cave for a period of time, Padmasambhava and Mandarava manifested the accomplishment of immortality practice, which is to integrate the deathless state of non-dual awareness in every moment. In spite of this accomplishment, the King of Zahor was outraged that his daughter had consorted with what he assumed was ‘a common vagrant who was pretending to be a holy man’. So the King sent his army out to capture and burn Padmasambhava and Mandarava to death. But when the King came upon the burning pyre which was to be his revenge upon the Tantric Buddha and his Enlightened Consort, he discovered that Padmasambhava had transformed the sea of flames into a lake. On the lake floated a pristine lotus blossom and on that sat the Great Guru and his Consort in the bliss of supreme accomplishment.