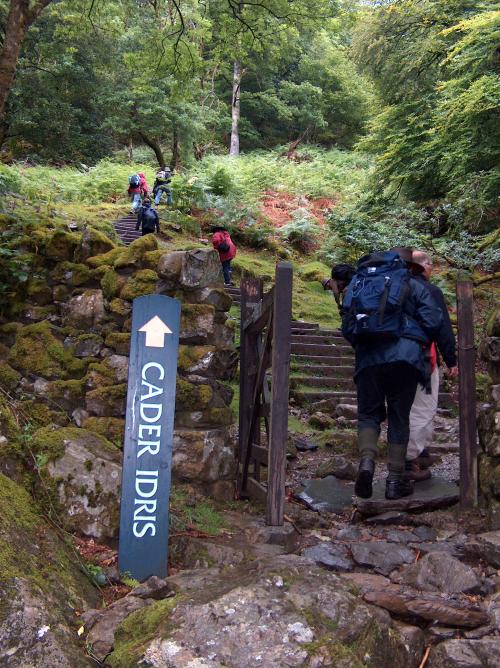 The major project for the craft retreat week in June 2004 with Ngala Nor’dzin and Ngala ’ö-Dzin, was the creation of a Khyungchen Aro Lingma appliqué. The secondary aim was to redecorate the shrine room at their home, Aro Khalding Tsang. It was also intended to end the nine day retreat with the ascent of the mountain, ‘Cadair Idris’ (the seat of Idris – the Welsh for seat ‘cadair’ has generally been anglicised to ‘cader’).

Ngala ’ö-Dzin and a few apprentices departed early to set up camp at the foot of Cadair Idris, and also to climb Craig-yr-Aderyn. Craig-yr-Aderyn (Bird Rock) was the site of regular expeditions for the Aro sanghas in earlier years when retreats were held nearby in mid-Wales. It is now a place of pilgrimage for our sangha, as the place where Khandro Déchen danced and received ordination.

Ngala Nor’dzin set off for mid-Wales as soon as Daniel and Richard returned home from school, and by mid evening we were all assembled at the campsite. The site that Samten had found was ideal, as we were able to establish our own little camp in a circle at the far end of the field with a stone edged firepit in the centre. We were private enough to be able to sing Dorje Tsig Dün before meals and to orate the Drinking Song of Kyabjé Dud’jom Rinpoche. Cadair Idris loomed over us in an imposing manner, challenging us to prepare for scaling its heights on the following day.