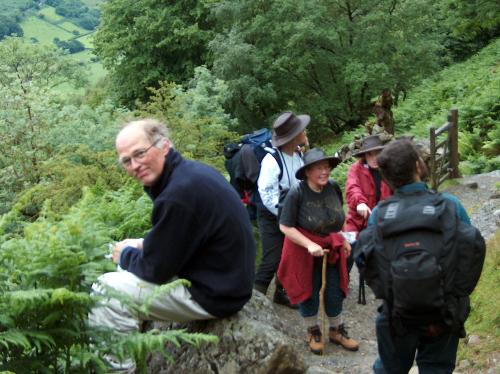 The Ascent of Cadair Idris

The 10 day craft retreat in June 2004 ended with an expedition to climb the mountain ‘Cadair Idris’, in mid Wales. Everyone had worked hard during the week creating the appliqué of Khyungchen Aro Lingma and was looking forward to a couple of days practising amid the elements of this wild Welsh mountain.

Having arrived at the campsite on the Friday evening at the end of the retreat, we were woken on Saturday morning to the sound of heavy rain. However by lunchtime it had eased off and we decided that the cloud had lifted sufficiently, and the fairer weather seemed settled enough, for it to be safe to attempt climbing Cadair Idris. It is hard climb, with steep and uneven steps for the first third of the climb through woodland next to a fast flowing stream. We kept up a steady pace, naturally breaking into three or four groups of differing abilities. We had been joined for the weekend by one of Ngak’chang Rinpoche and Khandro Déchen’s apprentices, Shédröl Khandro. Naljorma Rin’dzin, Ngakpa Zhal-mèd and Richard were the front runners, arriving at Llyn Cau, the lake near the peak of Cadair Idris a little while before the rest of the party.

Once all the party had arrived at the lake we were able to sing Dorje Tsig dün to the ‘Flight of the Vulture’ tune, and Yeshé Tsogyel mantra.