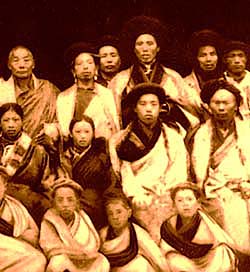 This old and atmospheric photograph of some of the Repkong ngakpas is an extremely important image, in that it shows a group of boys as ngakpas. This marvellous image conveys another side of life in Tibet from the one to with which most people are familiar – even in terms of the family traditions to which we have given so much attention. Those in the West who have studied Tibetan spiritual culture will be aware of the way in which children are raised as monks and nuns – but maybe not of the way in which the same applies to ngakpas and ngakmas. Although many lineages of the gö-kar chang-lo’i dé run from parents to children - there are also dratsangs or colleges in which children are trained according to the gö-kar chang-lo’i dé – the sangha of the those who wear long braided hair and white skirts.

The Repkong Ngakpa Dratsang was not the only such college in Tibet. Another famous gö-kar chang-lo college is the one in Amdo which was presided over by Lama Gompo Tsédan Rinpoche. Many smaller colleges existed in which training could be received but unfortunately little exist now outside Tibet. Ngak’chang Rinpoche and Khandro Déchen have said that it is their hope that such dratsangs for children can be established in the future as religious schools where the conventional school curriculum can be combined with training which would lead toward ngak’phang ordination in adulthood. The syllabus of such a dratsang would include the study of Dharma works in English and other European languages of such great masters as Chögyam Trungpa Rinpoche and Dung-sé Thrinlé Norbu Rinpoche, spoken Tibetan – as well as Tibetan language classes for the study of Tibetan texts.

Ngak’chang Rinpoche commented:
This photograph of long-haired young boys with their white skirts and yogic shawls in the company of the senior ngakpas of the dratsang brings tears to my eyes. It is images such as this which serve us greatly in terms of the future and what we could achieve in the West.