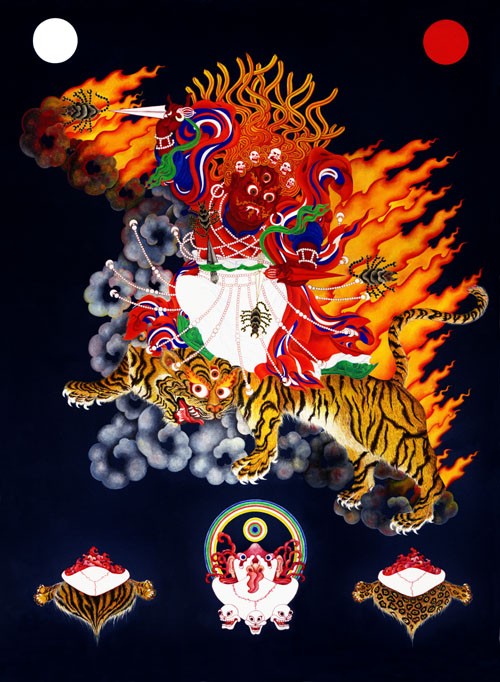 Dorje Tröllö is the incendiary holder of the Three Terrible Oaths:
Whatever happens; may it happen!
Whichever way it goes; may it go that way!
There is no purpose!

Ngak’chang Rinpoche comments:
The Three Terrible Oaths are a statement which places the practitioner in the entirety of his or her own situation. There is no ‘nicer’ spiritual world to which the practitioner can retreat. Whatever happens; may it happen, means that we do not make attempts at surreptitious deals with reality in which we delude ourselves that our practice will allow us to ‘live happily ever after’. Whichever way it goes; may it go that way, means that when we fall from the towering cliff of birth – we do not pretend that the end result of that fall is not death. There is no purpose, means that there is no one overriding, overarching, all inclusive – ‘purpose’. God is not working ‘His’ purpose out. There is no such ‘God’ and no such ‘purpose’. Reality is simply the dance of emptiness and form and compassion is the recognition that everything is its own purpose of itself. Each moment of reality is perfect as it is.

Khandro Déchen says the following of Dorje Tröllö:
His hair blazes upward in furious flurries of searing flame. His eyebrows crackle with electrical storms of sparkling fire, displaying his ability to obliterate every nuance of dualistic distraction into the immaculacy of pure and total presence. He wears the wrathful five-skull crown as the sign of his power to transform conflicting emotions into the spectral wisdoms of chö-ku; and to instantaneously transform degraded forms of the physical elements into the play of chö-ying.