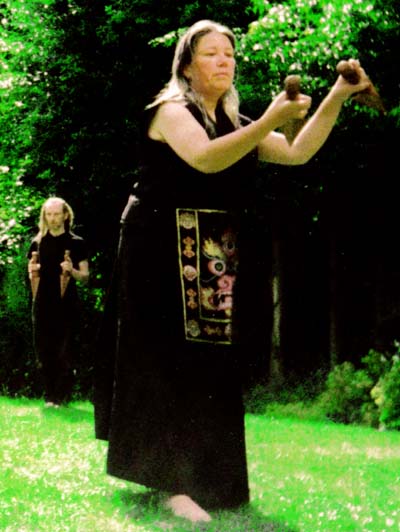 Celebration of the Solar Eclipse

This photograph was taken at eleven minutes past eleven on the eleventh of August 1999 – at the time of the full solar eclipse in Penarth, Bay Area of South Glamorgan, Wales. The strange colour of this picture is due to the eerie light at the time of the eclipse. Ngala Nor’dzin Pamo is one of the major practitioners of Phurba Dance within the Confederate Sanghas of Aro, and here she is shown with apprentices dancing the vajra steps of the phur-gön – the phurba protectors. The black costume is an essential part of this dance, which is performed to stab the root of negativity.

Ngala Nor’dzin said:
According to Kyabjé Künzang Dorje Rinpoche – in this period when malicious persons pose as Buddhist practitioners merely to validate their own neuroses, one of the important methods of nullifying their activity in the world is through Dorje Phurba practice. This is of benefit both to the victims of malicious intentions and to the perpetrator of maliciousness. When the mikha of hatred (khom ’jug mi kha – slanderous ignorant speech) is rampant, the phurba dance purifies the negativity produced by those who attempt to create schisms in sanghas and ill feeling amongst vajra brothers and sisters.

Khandro Déchen said of phurba dance:
The phurba stabs the root of attraction, aversion, and indifference – negativity is liberated into its own free energetic state. This dance is a powerful means of relating with those who harm others. We are often intimidated or frightened when we encounter the confused activity of harmful people – but through this dance we are able to stab out own need for self protection. In this joyous condition we are able to relax in the knowledge that nothing can harm our empty nature.

Whilst Ngala Nor’dzin was performing the phurba dance, her sangyab Ngala ’ö-Dzin played rolmo – the wrathful cymbals, and apprentices of Ngak’chang Rinpoche and Khandro Déchen played large drums and dungchen. This was one of the high points of the 1999 Confederate Sanghas of Aro Tantric Crafts Retreat in which dance costumes were made and many aspects of the tradition were taught.

Ngala Nor’dzin Pamo is one of the main teachers of Phurba Dance in the Confederate Sanghas of Aro and this remarkable Vajra Dance has been performed at most of the gö kar chang lo ordination retreats since 2000.