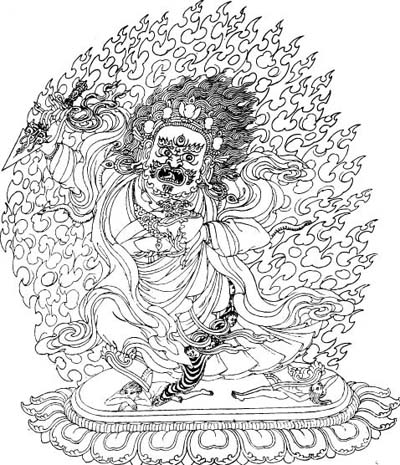 The protectors of the vajra space

Khandro Déchen says of this traditional line drawing:
This line drawing describes the phurba protector – the one who establishes the space in which Dorje Phurba will dance the vajra steps which annihilate anger in all its forms: spite, malice, cruelty, unkindness, meanness, brutality, hatred, resentment, bitterness, umbrage, antipathy, vitriol, viciousness, violence, abusiveness, and vindictiveness. The phur-gön dancers manifest as both male and female protectors. The first dancers are female, the next are male, and then they alternate throughout the dance as each elemental manifestation of Dorje Phurba takes the central stage. The four phur-göns represent the four Buddha Karmas. Although the phur-gön dancers dance with two phurbas – this manifestation is shown holding a skull bowl. In this representation of the phur-gön we see the protector manifesting both genders through holding a skull bowl to represent the female protectors and a phurba to represent the male protectors. The skull bowl is the symbol of wisdom and the phurba the symbol of method. The fire shown in this line drawing is particularly electric and arises without clouds as a ‘searing blaze of razors’ in which the protector manifests the Buddha Karmas.

Ngak’chang Rinpoche says of the phurba protector:
It is important to remember that the phurba also stabs the ‘passive aggression’. There are many forms of ‘passive aggression’ within the spiritual or mock-spiritual world. There are the manipulations which disguise themselves as ‘spiritual concern’. There are many forms of anger which we need to destroy in ourselves and the worst are those which imitate spiritual self-righteousness. Even if we are critical of others who may be engaged in harmful acts, we need to have some awareness of the fact that people suffer. We also need some humour about our own strongest feelings. It is valuable to have a critique of statements which undermine the Vajrayana – but one’s critique needs to be informed by the sense in which all beings have beginninglessly enlightened natures. This creates an ambivalence which allows us to laugh at our own self-righteous indignation and to temper our acts with human warmth.