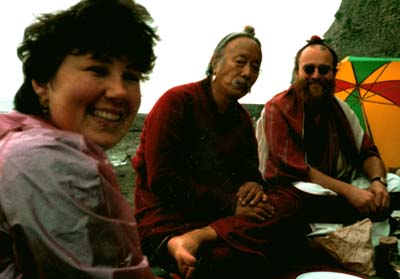 Most of the people who attended this picnic on the beach with Kyabjé Chhi’mèd Rig’dzin Rinpoche, had little understanding of the rare and precious opportunity it afforded. It was an extraordinary event. Throughout the morning preparations for the picnic it rained heavily.

Ngala ’ö-Dzin continues:
The rain during the thirty minute drive to Southerndown beach was torrential. The windscreen wipers were on their fastest setting and visibility was still poor. Ngak’chang Rinpoche was asked whether he could see the road and replied that—yes—he could almost see it.

Arriving in the car park on the seafront, Ngala Nor’dzin and Ngala ’ö-Dzin helped unpack the car under the shelter of raincoats and large umbrellas. Ngak’chang Rinpoche and Khandro Déchen arrived a few minutes later with Kyabjé Chhi’mèd Rig’dzin Rinpoche. It was still raining hard as the car descended the hill but the moment Chhi’mèd Rig’dzin Rinpoche stepped out of the car it stopped raining.

Ngala Nor’dzin continues:
It was as if a switch had been flicked. As we made our way down to the beach not only did the rain stop, but the sun came out – and by the time we had reached the place Chhi’mèd Rig’dzin Rinpoche chose for the picnic, the sun was really quite hot. We spent the most wonderfully pleasant afternoon with Chhi’mèd Rig’dzin Rinpoche, enjoying our picnic and receiving transmission through simply being in his presence.

Ngala ’ö-Dzin continues:
The sun even shone throughout the picnic, but all too soon it was time to pack things up and return to Cardiff. We arrived back at the car park, and the moment Chhi’mèd Rig’dzin Rinpoche stepped into the car Ngak’chang Rinpoche had borrowed for the occasion, it began to rain again. We finished packing the cars under umbrellas, and it rained torrentially all the way home.

Southerndown beach is an extremely popular beach and busy in the summer – yet the presence of Kyabjé Chhi’mèd Rig’dzin Rinpoche remains. Ngala Nor’dzin and Ngala ’ö-Dzin often go there with their apprentices at the end of a retreat, and find it to be a place where transmission naturally occurs. There is a tradition which dates back to that time, of painting mantras on stones and leaving them at Southerndown – then every time a visit is made the painted stones are left and new stones are collected to continue the tradition.