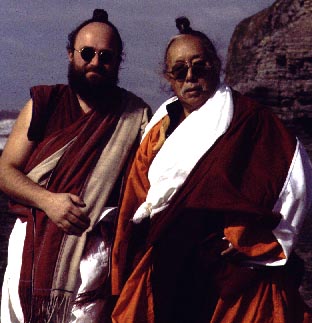 This photograph of Ngak’chang Rinpoche and Kyabjé Chhi’mèd Rig’dzin Rinpoche was taken on the beach at Southerndown after Chhi’mèd Rig’dzin Rinpoche had given a teaching on Dzogchen men-ngak-dé in which he took the imagery of his oral transmission from the nature of the ocean and its waves. This was the most extraordinary occasion not only because of the nature of the teaching, but because of the circumstances of the weather.

Ngak’chang Rinpoche says of that occasion:
A picnic had been planned, but when the day arrived so did torrential rain – of the unremitting kind which is common in Wales. Apprentices arrived nonetheless and were introduced to Kyabjé Chhi’mèd Rig’dzin Rinpoche, who surprised everyone by showing no sign of abandoning the picnic. We set out for Southerndown, with the thought that it might possibly be clearer an hour’s drive from Cardiff – but that did not turn out to be the case. The rain thrashed down for the extent of the journey to such a degree that it was, at times, necessary to drive below 20mph as if we were in a thick fog. We finally arrived at Southerndown under a lowering sky and continuous rain, but no sooner had we turned into the car park than the rain began to ease. At the moment when Kyabjé Rinpoche opened the car door a ray of sunshine flickered through a crack in the cloud-base and from that moment on, the rain stopped. We had our picnic; Kyabjé Rinpoche gave a wonderful teaching on Dzogchen men-ngak-dé; and we returned to the cars. Then – as soon as Kyabjé Rinpoche’s car door closed, the rain burst out of the sky again as if a tap has suddenly been turned on. It then rained the entire drive back to Cardiff.