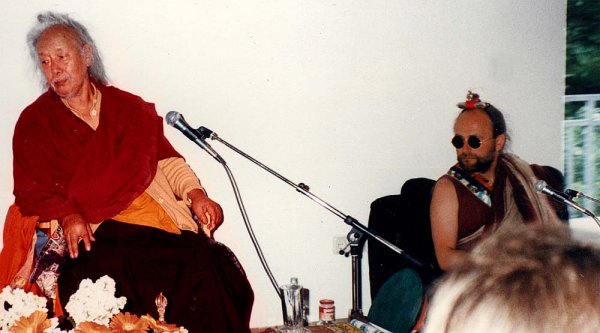 The audience expected me to teach and were naturally surprised when I simply sat with Chhi’mèd Rig’dzin Rinpoche and ventured nothing in terms of an introduction. Only when Chhi’mèd Rig’dzin Rinpoche asked me to speak did I venture anything, and then it was under the most amusing circumstances. Rinpoche would speak for a while and then turn to me and say: ‘Now you say something for half an hour.’ As soon as Rinpoche gave the instruction I would begin, and take up the teaching from that point – but whenever I spoke for less than the allotted time – I would be reminded that there were: ‘. . .still five minutes coming.’ I would then have to offer another conclusion to the subject I had already concluded. The entire weekend was the most gruelling collection of extemporaneous expositions, and I learned a great deal from being put on the spot in terms of teaching on any subject at a moments notice.