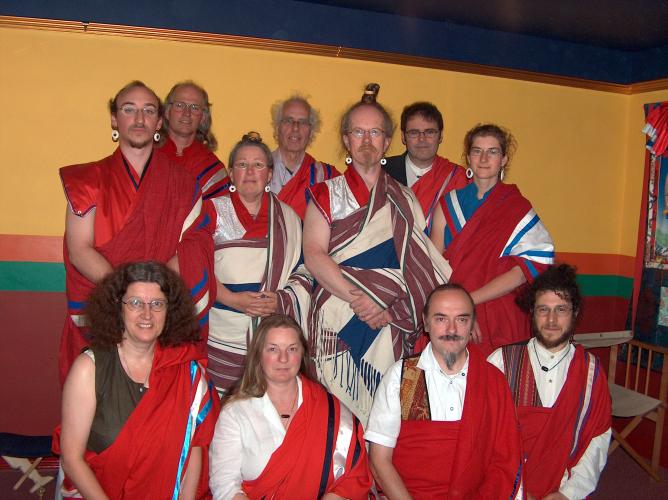 The summer craft retreat at Aro Khalding Tsang was a joyful and fruitful occasion. Ngala Nordzin, Ngala ’ö-Dzin and their sangha set themselves an ambitious aim for the week’s retreat: to create a Khyungchen Aro Lingma appliqué, to redecorate the shrine room, and to climb Cadair Idris (a mountain in mid Wales) during the weekend at the end of the retreat. It was also hoped that there would be time for a horseriding expedition – as Ngak’chang Rinpoche and Khandro Déchen encourage horseriding as a lhatong meditation method.

Ngak’chang Rinpoche said:
Horseriding was part of the culture of the gö kar chang lo’i dé – especially in Kham and Golok, where being respected was sometimes a question of life and death. Golok is famous for its bandits and travel was often precarious even for spiritual practitioners – but the banditry of those areas had a healthy respect for the gö kar chang lo’i dé – for not only had they evident powers, but they were also often fine riders who could easily vie with bandits for prowess on horseback. In the West we are not exactly beset by rampant bandits – but we are beset by rampant conceptuality, and there are few finer ways of abolishing conceptuality than to maintain presence on a galloping horse.

This photograph was taken by Richard, one evening in the middle of the retreat when the shrineroom was almost finished. Ngala Nor’dzin and Ngala ’ö-Dzin are flanked by their ordained sangha, Ngakpa Zhal’mèd and Ngaljorma Rin’dzin, and surrounded by the other members of their sangha.

Ngala Nor’dzin comments:
I always especially look forward to the summer craft retreat. It is a wonderful mixture of formality and informality, intensity and relaxation. It is marvellous to discover apprentice’s skills and areas of expertise.

Ngala ’ö-Dzin continues:
I greatly value the way in which the teachings weave themselves in and out of the activities. Apprentices ask questions of myself or Ngala Nor’dzin while we are working together on a part of the project.

This was the second year that Ngala ’ö-Dzin and Ngala Nor’dzin’s sangha have made an appliqué, having completed the Yeshé Tsogyel appliqué in the 2003 craft retreat.

Ngala Nor’dzin remarks:
Several apprentices were noticeably more confident about their sewing after the skills they had developed making the Yeshé Tsogyel appliqué. Naljorma Rin’dzin, for example, had little sewing experience in 2003 and needed to ask for guidance at every step. While making the Khyungchen Aro Lingma appliqué however, she was relaxed and able, needing little assistance, and even instructing and helping others.

Ngala ’ö-Dzin continues:
It would seem that many apprentices’ experience of craft work at school left them believing themselves to be inept. However it is our experience that everyone can learn to sew with confidence quite quickly within the supportive atmosphere of a sangha craft retreat.

Ngala ’ö-Dzin, Ngala Nor’dzin and their sangha achieved all that they set out to achieve on the 2004 craft retreat – including a horseriding expedition where the experienced riders galloped across Ogmore Beach. The shrine room looks magnificent and is now adorned by a third appliqué: that of Khyungchen Aro Lingma, the gTértön of the Aro Lineage. This will be a source of inspiration for all who visit the shrineroom at Aro Khalding Tsang, as well as for those who see this and the other appliqués at public events.