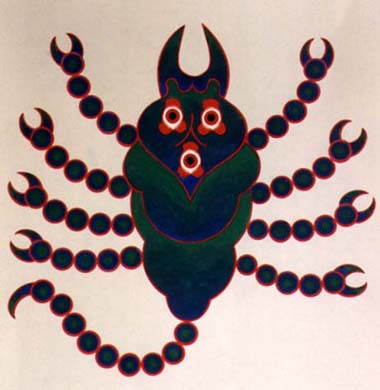 Scorpion in Tibetan – digpa ratsa (bsDigs pa ra tsa) – means negative action or harmful action (also menace or threat). Of all images, that of the scorpion fully portrays the power of Vajrayana in terms of what is meant by transformation. Ngak’chang Rinpoche says of the scorpion:
The wrathful symbolism of Vajrayana is often misunderstood in the West because of our cultural predisposition to polarise ‘good’ and ‘evil’. The polarity of ‘good and evil’ does not exist in Buddhism – there is only the ‘good’ of the enlightened state, and the distortion of that ‘good’. This means that no matter how negative a situation or person may have become through dualistic obsession – that situation or person can be transformed. The power of transformation is thus depicted in Vajrayana through the scorpion. The statement being made here is that: ‘If the scorpion can be transformed then anyone, and anything can be transformed.’ Everyone and everything – is nothing other than the energy of the non-dual state – and therefore the power of every facet of existence can be harnessed through pure vision as a means of attainment and compassionate activity.

Khandro Déchen says of the scorpion:
This image is found in many places in Vajrayana awareness imagery. It is found in the awareness images of the wrathful awareness beings such as Dorje Tröllö (rDo rJe gro lod) and Tsogyel Tröllö (tshog rGyal gro lod). It is also found in the depictions of the protectors such as the scorpion horned minion Digpa Ru-srin (bsDigs pa ra tsa ru can mGo srin) of Za Rahula. The scorpion is often used as a seal by Tantric Lamas. Ngak’chang Rinpoche has a scorpion seal, and Chögyam Trungpa Rinpoche’s scorpion seal sometimes appears on his calligraphies. This scorpion is unique inasmuch as, its leg sections are five fold, its tail sections are ninefold, and it has a ‘wisdom eye’. It is painted in blue, green, and red – the colours of space, air, and fire. A scorpion of this type can be found on the Aro gTér wrathful empowerment shawl.

When the apostate king Langdarma attempted to destroy Buddhism in Tibet, the mahasiddha Sang-gyé Yeshé terrified Langdarma by employing a wrathful mudra to create the apparition of a scorpion to appear above Langdarma’s head. The scorpion was the size of nine yaks. This experience caused the king to desist in his persecution of the gö-kar-chang-lo’i-dé (gos dKar lCang lo’i sDe). Dig-dzub Chagya (bsDigs mDzub phyag rGya) – the ‘forefinger-scorpion gesture’ is a threatening mudra which employs the extended forefinger and index-finger.