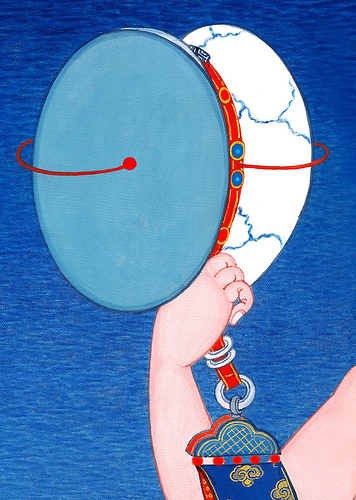 Khandro Déchen comments:
Rang-rig Togden possessed a wonderful gÇod drum. This thangka does not exactly show the drum as it was, inasmuch as the shape is the conventional shape for a gÇod drum. It does, however, show the suture marks which would have existed on the original drum. The drum was lined internally with dakini script which was placed there by his Root Teacher, Jomo Pema ’ö-Zér.

As an emanation of Thangtong Gyalpo – Rang-rig Togden possessed a degree of the former’s skill in the arts of construction. He crafted the drum from five male skulls and five female skulls. The skulls were riveted together as five lobes linked by other sections of skull. These two large lotus-shaped bowls constituted the sides of an immense gÇod drum, which was three spans in diameter and was skinned with the belly-skins of a male and female crocodile. The leather furbishments were made from the skin of a drong (’brong), a wild yak, and the strikers were said to have been stuffed with the pubic hair of male and female yeti.

The drum was then passed to A-Kyong Düd’dül Dorje, who replaced the worn-out leather band around the waist of the drum with an iron band. The black iron band was inlaid with gold (in the style made famous in Dér-gé in Kham) with scenes from the Eight Great Charnel Grounds* – the Dür Khrod Gyèd (dur khrod rGyad).

On A-Kyong Düd’dül Dorje’s death the drum was kept for the incarnation of Aro Yeshé, as he never participated in any form of outer ritual practice. No trace has been found of this gÇod drum at this time.