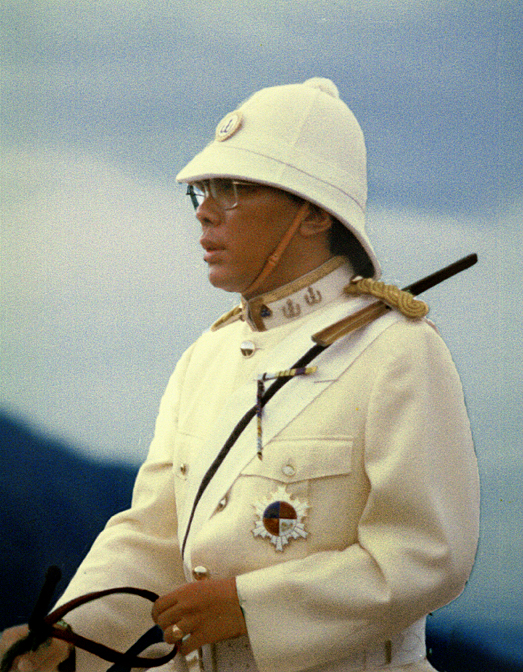 Rig’dzin Chenpo Chögyam Trungpa Rinpoche, the 11th Trungpa Tulku, was born in 1939, in Géjé, near Pa-gö Punsum Mountain, in Kham. Soon after his birth a Lama from Tashi Lha’phug Gompa came to Géjé and recognised him as a Tulku. When the 15th Karmapa was visiting Pépung Gompa in Kham, he had a meditative vision revealing to him where the incarnation of the Trungpa Tulku was to be found, and he entrusted this information to Jamgön Kongtrül Rinpoche of Séchen. He told him that the Tulku had been born in a village five miles north of Surmang Gompa. He indicated the name of the village with the syllables ‘gé’ and ‘jé’, and said that if Kongtrül Rinpoche travelled there he would discover a family with two children, and that the son would be the reincarnation. The 15th Karmapa declared:
The door of their dwelling faces to the south, and they own a large red hound. The father’s name is Yeshé, and the mother’s name is made up of the syllables ‘chung’ and ‘tso’.

On hearing this, Jamgön Kongtrül of Séchen left immediately for Surmang.

In a nomad tent, on the borders of the hamlet of Géjé, Jamgön Kongtrül Rinpoche found the family of the Karmapa’s vision. The tent entrance faced south and the family owned a sizeable red dog. There were two children as the vision described – a boy and a girl. There was a problem however, inasmuch as although the mother’s name Pochung Tungtso concurred with the Karmapa’s vision, the father’s name did not. It was later discovered however, that the boy was actually the son of a man called Yeshé Dorje rather than the father of this boy’s sister. When this hidden fact was revealed, it was immediately clear that the boy was exactly as described by the Karmapa. He was the authentic Trungpa Tulku.

Rig’dzin Chenpo Chögyam Trungpa Rinpoche was the spiritual head of Surmang – the eleventh incarnation in a lineage of great masters beginning with the mahasiddha Trungpa Kunga Gyaltsen. In the late fourteenth century there was a remarkable yogi – a disciple of the Karmapa – who was known as Trung-ma-sé. Trung-ma-sé was the son of a Chögyal of Menyak, in Kham, who had quit his father’s palace in order to live as an itinerant ngakpa. He studied under the 15th Karmapa at Tsurphu and entered retreat for ten years, after which his fame as an enlightened master spread. Disciples flocked to him from widely dispersed areas and one of them was Trungpa Kunga Gyaltsen. Trungpa Kunga Gyaltsen advanced rapidly and began to spontaneously display miraculous powers. He was recognised as an incarnation of the Mahasiddha Dombi-Heruka.

Dombi-Heruka was a tenth century Kashmiri Maharaja who quit his throne in the year 936 to live with the daughters of an outcaste dhobi wallah (dom-bhi – washerman). The dhobi wallah—named Ran-ga—had two daughters named Hamsi and Nagalata who were wonderfully talented dancers. They appeared one day at Dombhi-Heruka’s court and won such favour through the skill of their dancing that Dombhi-Heruka elevated them to royal status as consorts. This resulted—as Dombhi-Heruka expected—in a welter of righteous indignation on the part of the conservative element. An attempt was even made on his life, which gave Dombhi-Heruka the perfect opportunity to flee the court with Hamsi and Nagalata. They lived then in the forested mountains of Kashmir as a Yeshé ’cholwa yogi with his two consorts. Dombi-Heruka was a Mahasiddha of miraculous attainments, who rode on a tigress with cobras entwined around his throat, waist, wrists, and ankles. When Dombhi-Heruka is depicted iconographically, the tigress is Nagalata and Hamsi is seated beside him on the tigress.

Ngak’chang Rinpoche comments:
When looking at the lives of Dombhi-Heruka and of Chögyam Trungpa Rinpoche one sees a striking parallel. It would seem that whether the situation described is 10th Century Kashmir or 20th Century Britain there is no difference in terms of there being those who are open to Vajrayana and those who are frightened by it. In the same way that Dombhi Heruka—replete with consorts—quit the royal court for the wilds of the mountains, Chögyam Trungpa Rinpoche—replete with consort—quit the timorous company of the theosophically absorbed for the freedom of the USA. It would be utterly presumptuous of me to say that I had a similar experience, but I feel that I am able to say that I perceived a greater openness to Vajrayana in the USA at the time when I was first invited to teach there.

Once the Trungpa Tulku was recognised, preparations were made for his enthronement and he was trained as the supreme head of the entire Surmang complex of Gompas and retreat hermitages. Although Chögyam Trungpa Rinpoche was descended from the Lineage of the yogis from whom the Kagyüd lineage was derived (Tilopa, Naropa, Marpa, and Milarépa), his Heart Master was the Nyingma Lama Jamyang Kongtrül of Séchen.

Ngak’chang Rinpoche comments:
It was through Jamyang Kongtrül that Chögyam Trungpa Rinpoche received the Dzogchen teachings which had such an exceptional influence on his life and teaching. Chögyam Trungpa Rinpoche was a master of both Chagya Chenpo and Dzogpa chenpo meditative traditions – which is why he spoke of Dzogchen as ‘Maha Ati’ in respect of its relationship with Mahamudra. One can read Dzogchen in all his books – it shines through the descriptions of the most basic teachings on Sutra topics and on the disciplines of shi-nè / Lhatong. Chögyam Trungpa Rinpoche’s masterful aptitude with the English language enabled him to speak in the linguistic stylistic of Dzogchen to provide informal symbolic transmission through the written page. It is thoroughly extraordinary to be able to read his books and to gain a direct insight into the non-dual state.

When he returned to Samyé-Ling there was a noticeable transformation in Chögyam Trungpa Rinpoche’s mien. He methodically shed external ritual formalities – inasmuch as he entirely abjured the chanting of liturgy and began to place great emphasis on silent sitting mediation. In place of ritual practice, he focused on Chagya Chenpo (Mahamudra) and stressed the importance of Buddhism as a non-theistic tradition. This was the beginning of his discussions of reliance on the outer forms of ritualism and liturgy as spiritual materialism.

Ngak’chang Rinpoche comments:
Chögyam Trungpa Rinpoche’s fabulous transformation from formal monastic abbot to gloriously informal Mahasiddha caused consternation amongst a faction of the more timid conservative ‘religious sensitives’, and it became apparent that Britain was not the most open venue in terms of appreciating his style of teaching. This is still unfortunately still somewhat the case in Britain – even though Khandro Déchen and I have some wonderful students and disciples in England, Wales, and Cornwall. Chögyam Trungpa Rinpoche’s departure from Britain was an extremely sad loss but a wonderful opportunity for the people of the United States where he made his home. It is one of the few regrets of my life that I was never able to meet Chögyam Trungpa Rinpoche and I hope one day to have the honour of meeting his incarnation. Kyabjé Dilgo Khyentsé predicted that Chögyam Trungpa Rinpoche would have five incarnations. An incarnation has been found in Tibet and he is currently installed in Surmang.