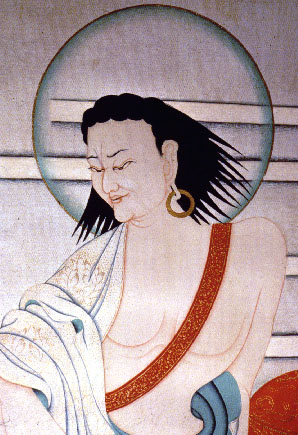 Renowned yogi, poet, and enlightened genius, Milarépa is a forefather of the Kagyüd schools – in the line of master to disciple from Tilopa (988-1069) to Naropa (1016-1100) and thence to Marpa (1012-1097) the Tsa-wa’i Lama of Milarépa. Tilopa, Naropa (and his sister Niguma), and Milarépa were all non-celibate mahasiddhas. An excellent book was written about the life of Naropa by Chögyam Trungpa Rinpoche – a renowned yogi, poet and enlightened genius of the 20th century. The book is called ‘Illusion’s Game’, and this marvellous text gives a thoroughly brilliant insight into the meaning of Milarépa’s experience for Vajrayana practitioners in the West. One is also able to glimpse within this book highly illuminating facets of the authentic Lama-disciple relationship.

Ngak’chang Rinpoche, also known for his poetry, says of Milarépa (with regard to the meaning of his training):
Milarépa was one of the most profound examples of what it means to be the disciple of a Tantric Lama –a vajra master. It was not that his conduct toward his Lama was always perfect; but he carried through perfectly to the end. He saw the path to its conclusion. For those who wish to learn about the Lama-disciple relationship, Milarépa’s training offers so many wonderful examples. We do not have to be literalist in terms of the trials of Milarépa because the outer forms of our experiences with Lamas in the present day may be substantially different. What we need is to understand the principle and function involved in seeing the Lama with pure vision – and in this Milarépa is a pre-eminent example.

Although Milarépa is part of the Kagyüd lineage –he was also a holder of a Nyingma lineage, who counted numerous ngak’phang practitioners,* both répas and rémas, amongst his disciples – some, great Lamas such as Réchungpa. Milarépa was a disciple of Marpa the Translator and his sang-yum Dagmèdma. He was a ngak’phang yogi who specialised in the practices of the gTu-mo. He also specialised in the practices of Dzogchen Long-dé which he received from the Nyingma Lama – Rongton Rinpoche (rong sTon rin po che).

He is shown here wearing the white shawl symbolising gTu-mo and the gomtag representing his practice of Dzogchen Long-dé. He wears the yogi’s earrings and the uncut hair of the gö-kar chang-lo’i dé. Milarépa is often considered to have been celibate – but according to the namthar of Milarépa within the Drukpa Kagyüd lineage of Shakya Shri, Milarépa had a sang-yum, a female consort / spiritual wife. (Currently the throne of the Shakya Shri’s lineage is the A’pho Rinpoche Gompa in Manali, in the Kulu valley of Himachal Pradesh – Northern India. An English-language translation of the namthar is being prepared – but it is not known when it will become available.)