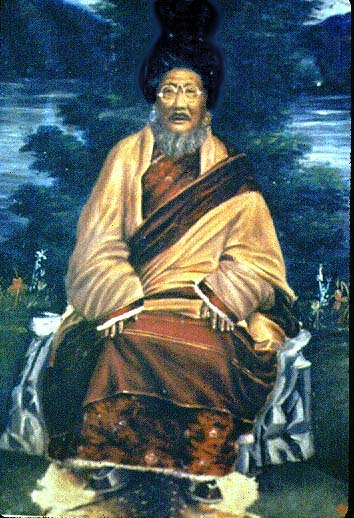 Ngak’chang Rinpoche said:
Shakya Shri was initially the cook at a Drukpa Kagyüd Gompa. He was known during that period of his life as a devout practitioner, but he was not particularly respected by the monks, who regarded his interest in practice with mild amusement. They were not aware that their cook was a truly great yogi, and so they would often make fun of him when he attended the teachings in his free time. On one occasion the Abbott of the gompa reprimanded the monks for the stupidity and ignorance of their remarks. He told them that there would come a time when they would look back on their behaviour with shame. He told them that when they realised who Shakya Shri was, that they would be grateful to have a drop of his urine to drink.

Shakya Shri became a pure-vision gTértön, who received a cycle of gTérmas directly from Milarépa. It is this body of teachings which is practised today at the A’pho Rinpoche Gompa in Manali – in the Kulu Valley, Himachal Pradesh, Northern India. This picture of Shakya Shri is a mixture of photography and painting. Ngak’chang Rinpoche photographed this portrait at the A’pho Rinpoche Gompa when he stayed there in 1982. Part of the gTérma of Shakya Shri is a secret namthar (spiritual biography) of Milarépa in which it is disclosed that Milarépa was not a celibate yogi as is often thought. In this namthar the details of his female spiritual consort are given, and an image of Milarépa is presented which shows him to be a ngakpa in the authentic sense of the word – an ordained Vajrayana practitioner like his teacher Marpa. This portrait shows Shakya Shri wearing a red, white, and blue striped ngak’phang shawl. He is wearing the ngak’phang conch earrings (dung kyi a long) and the chuba of a naljorpa.