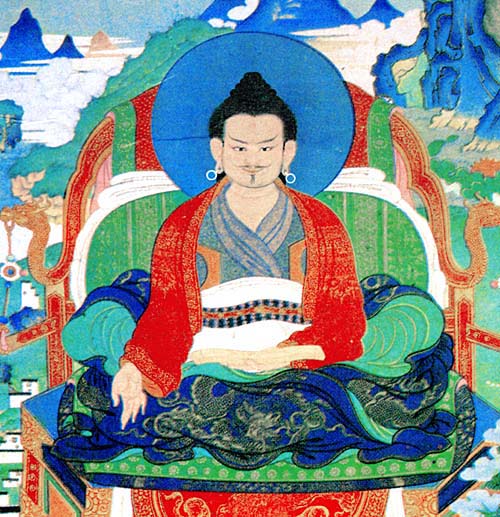 Marpa is often depicted with close-cropped hair, but here we see him as he may well have been – a gö-kar chang-lo yogi with uncut hair wound round into a coil on top of his head. He also wears the conch earrings of the ordained Vajrayana gö-kar chang-lo tradition of ngakpas (sNgags pa) and ngakmas (sNgags ma or sNgags mo). He holds a text in his lap to indicate that he is a translator. He sits on a throne in a wild mountainous landscape.

Marpa was the Root Lama (Tsawa’i Lama – rTsa ba’i bLa ma / Mula Guru) of Jetsün Milarépa – one of the most famous gö-kar chang-lo masters of Tibet. The rôle of the vajra master is extremely important in all schools and traditions of Vajrayana Buddhism – but particularly so to the Kagyüd and Nyingma who lay great stress on the relationship with the vajra master.

Ngak’chang Rinpoche says on this subject:
It is impossible to overemphasise the importance of reliance on the Lama if one is to engage in the practice of Tantra and Dzogchen. As is dramatically shown in the life of Milarépa – he was unable at one time to gain any success in his practice because he had not received the transmission from Marpa. Milarépa attempted to gain transmission and teaching elsewhere – but even though he received it – his practice was fruitless, until he received the teachings and practice directly from Marpa. One can find similar stories in many traditions – and so the principle is quite clear. In order to recognise one’s own enlightened state it is necessary to relate to that enlightened state through the Lama. It is one’s devotion to one’s Lama which is the key to liberation and all practice and effort is useless without it. It is devotion which gives one the capacity to cast aside one’s dualistic rationale and to break through obstacles which would otherwise terminally hamper one’s progress.