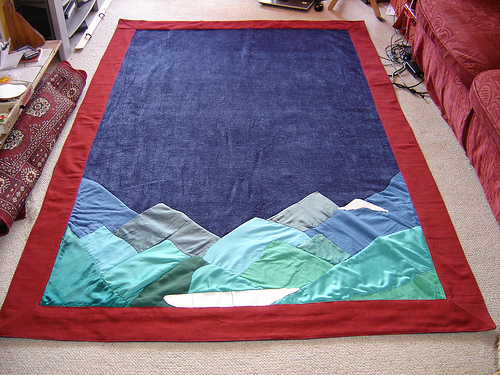 The first Padmasambhava appliqué has stood the test of time. It has been displayed at nearly every apprentice and open retreat in the UK since it was made in 1994. In 2006 it was given a little renovation. The backing fabric had become very faded and needed replacing, and also a new face had been embroided in Nepal for the appliqué. The original hand-embroidered face lacked the detail of the new machine-embroidered face created by the skilled machinists in Kathmandu. The sun and moon, the mountains, and the form of Padmasambhava were carefully cut around and sewn onto the new backing and frame, and the new face was carefully inserted.