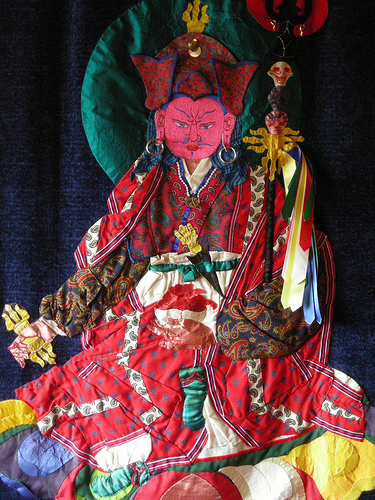 The Lineage Holders, Ngak’chang Rinpoche and Khandro Déchen, had not in the past felt it to be one of the Lineage’s highest priorities to establish a permanent physical home for the Aro Lineage. They felt that it was more important that people established their practice and their sense of themselves as tantrikas in the world, and used their limited funds to further other worthwile projects – such as the creation of tantric art like appliqués, the purchase of practice equipment, thangkas and statues, the creation of gTérbum and bone ornaments, and the establishment of Aro Books.

However in 2005 this view changed. During a visit to their root Teachers, Künzang Dorje Rinpoche and Jomo Sam’phel, in Nepal in 2005, Ngak’chang Rinpoche and Khandro Déchen were given the following instruction: Centres are very important in the West; very important to help firmly establish traditions such as yours. You must keep your money and build your own centre in the West. Hence the Drala Jong appeal was launched to fulfil this instruction.