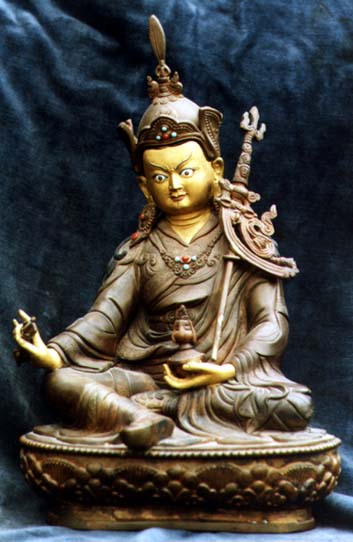 This beautiful representation of Padmasambhava is Ngak’chang Rinpoche and Khandro Déchen’s personal statue – gilded and ornamented with coral and turquoise for them by Gyaltsen Rinpoche in 1991. The expression of Padmasambhava in this statue, with his immeasurably kind, piercing gaze is one which makes this image of the Vajra Guru a great inspiration to the Confederate Sanghas of Aro and their Lineage-holders.

In a teaching given in Wales in 1999, Ngak’chang Rinpoche said of Padmasambhava:
For any Nyingma practitioner, Padmasambhava provides such a wealth of meaning, that it becomes difficult to know where to begin in saying anything about him. Padmasambhava is not only the founder of Buddhism in Tibet and the other Himalayan countries, but he is also a fundamental principle of existence – he is the nature of active compassion as it arises from the vast expanse of Mind. Padmasambhava spans all possible styles of relationship: to the village ngakpa or ngakma he is a friend whom one continually welcomes to one’s home. To the Mahayoga ngak’phang Lama he is the Buddha of this present time. As the Tantric Buddha, he contains the three kayas within himself, and thus encompasses Buddha ’ö-Pag-med (Amitabha) and Chenrézigs (Avalokiteshvara). As the Ati Buddha he contains the three kayas within himself, and thus encompasses Kuntuzangpo (kun tu bZang po – Samantabadra) and Dorje Sempa (rDo rJe sems dPa – Vajrasattva). Padmasambhava transcends time and history – because although he can be historically located at a certain time in Tibet, he can also be located in endless other times. Lamas continue to have visions of Padmasambhava and to receive gTérmas of his teachings. In this sense and many others – he is Vajrayana.