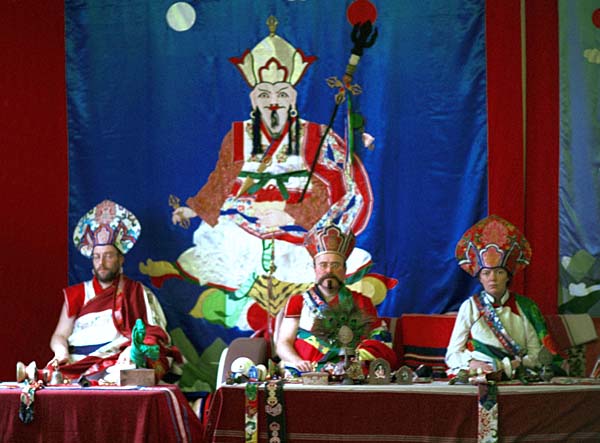 At the Ordination Retreat in Baarlo, Netherlands in January 2000, sixteen apprentices took ordination into the gö kar chang-lo’i dé. Among them were three apprentices of Ralzhig Pema Legden, who were the first in his sangha to take these vows.

The Lamas are sitting in front of an appliqué thangka of Padmasambhava crafted by Ralzhig Pema Legden’s apprentices in Europe. Two large appliqué thangkas were brought from Austria for the event, one of Yeshé Tsogyel and the one seen here of Padmakara in the form of Guru Nang-srid Zilngön (sNang srid zil ngon). These appliqué thangkas were made by the sangha of Ralzhig Pema Legden on a series of intensive Vajrayana craft retreats, and are a wonderful example of the energy of the Aro gTér tradition in the West.