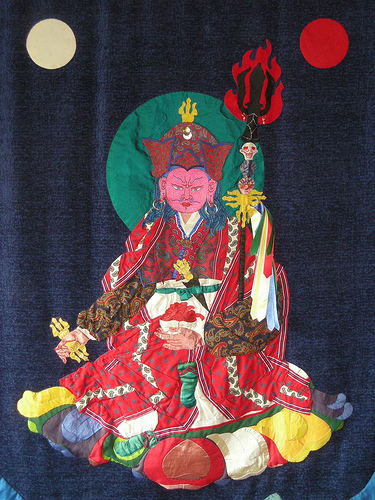 Appliqué thangkas are not a new idea and were in fact traditional in Tibet. In the monastic tradition much larger appliqués were created and used as backdrop, hanging down the walls of a monastery during a cham ceremony (ritual dance) or empowerment – or for any ritual occasion that took place outside. In yogic encampments smaller ones were used and pitched like tents with guy ropes to keep them in place. Hence Ngak’chang Rinpoche and Khandro Déchen’s suggestion to create appliqué thangkas arose from the Aro Lineage’s connection with the yogic tradition.