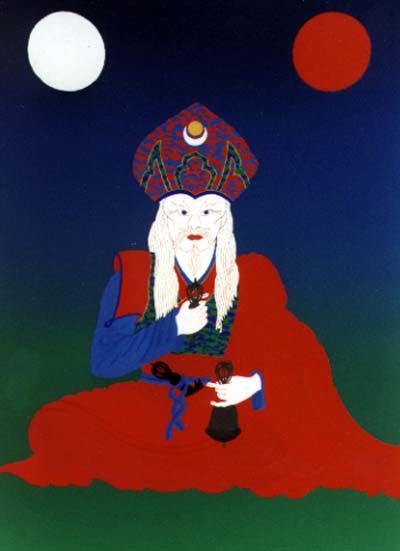 the previous incarnation of Aro Yeshé

This image of ’a-Shul Pema Legden was painted by Naljorma Dzü’drül Pamo, who is studying thangka painting with Khandro Déchen. It is her first painting, and she is currently engaged in reproducing Khandro Déchen’s thangkas for Aro gTér practitioners. This characterisation of ’a-Shul Pema Legden is far more representative of the actual Lama than the image of him that appears in the lineage thangka, which portrays him with Khyungchen Aro Lingma. In this lineage thangka he is portrayed as much older than he would have been at the time of his first meeting with Khyungchen Aro Lingma, probably more representative of ’a-Shul Pema Legden when he was in his sixties. He was in his early to mid-fifties when he left Khordong for a life of wandering with Khyungchen Aro Lingma.

’a-Shul Lama Pema Legden (’a shul bLa ma pad ma legs lDan) was the gTér scribe and visionary artist of the Nyingma gTértön, Khalden Lingpa. He was recognised by A-Kyong Düd’dül Dorje as the incarnation of an ‘unacknowledged’ daughter of the Sixth Dala’i Lama – A’dzom Yeshé Khandro. ’a-Shul Pema Legden, however, was not particularly known as a great yogi, or even as particularly intellectually gifted. He was most famous for having been struck by lightning three times to no ill effect, whilst standing on the flat part of the gompa roof observing thunderclouds. He also never took offence, and was of a cheerful disposition under all circumstances. He was a kind, gentle person with long white hair, a thick flowing moustache, and long chin-beard. He had broad cheek bones and striking, somewhat Mongolian features. He was a ‘nominal monk’ – a gényen – having never taken gélong, or even the gétsül vows which lead to full monastic ordination. When he had completed his third three-year retreat, in which his hair had grown long, Khalden Lingpa instructed him never to cut his hair again. This is why he appears iconographically as a ‘long-haired monk’.

’a-Shul Pema Legden was fond of birds, and would feed the wild birds with small scraps whenever he could. He liked to watch the birds flying around the gompa, and would be delighted by the noises they made. Some of the monks thought that he was a little bit childlike, because he would laugh at the antics of birds, and experience inordinate pleasure from observing their movements and expressions.