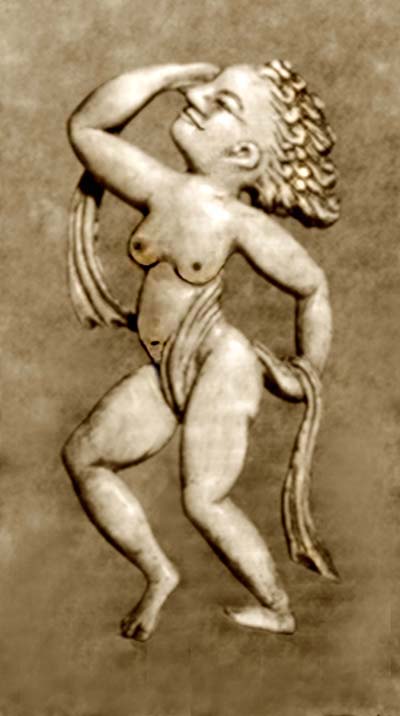 mistress of the jewel-mirror lake

Mélong Za Rinchen Tso (me long gZa’ rin chen mTsho), Mistress of the Jewel-mirror Lake, was one of the 22 major female disciples of Padmasambhava and Yeshé Tsogyel. Having realised the non-dual state through the intensity of her devotion, she hung her white robes on the rays of the sun and danced naked in the mountains – never again to wear clothes other than coloured light.

When the disciples of Padmasambhava are discussed, the focus is almost always on the 25 Siddhas of Chhimphu – the Chhimphu’i Drüpchen Nyér-nga. This includes Yeshé Tsogyel and sometimes Mandarava. The number 25 is not completely definitive, and accounts of the siddha disciples exist which number from 29 to more than 300. The lists differ in terms of whom they include, and one gains an impression that there was a core of around 40 to 90 siddha disciples. There were, of course, a great many more, if one includes the disciples of Yeshé Tsogyel who also took transmission from Padmasambhava.

Ngak’chang Rinpoche comments:
The female siddhas were astonishing. Although little is known of them – there is a vividness surrounding them which radiates from their very names. Their siddhis were of no lesser degree than the 24 male siddhas, and occasionally they were more remarkable in terms of the ‘outrageousness’ of their manifestations. We are presented here with women who should be known throughout the Vajrayana sanghas of the world and yet they remain obscure. Images of a few of them exist and it is to be hoped that Khandro Déchen and I will one day make these available. There are lists which mention a further 332 masters: ‘The 111 Siddhas of Yér-wa’; ‘The 111 Siddhas of Chu-wo ri’; ‘The 55 Togdens of Yang-dzong’; ‘The 30 Ngakpas of Sheldrak’; and ‘The 25 Ngakmas of Kha-chu’ – but little would appear to be known of them beyond these cryptic appellations. The early spread of Buddhism in Trans-Himalayan regions was a remarkable time – the womb of Vajrayana – and the gö-kar chang-lo’i dé of that time deserve our closest attention in terms of the inspiration they offer us today as the remote beneficiaries of their realisation.