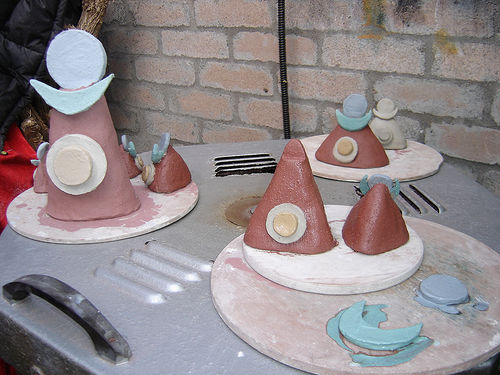 The tormas that were made on the craft retreat in July 2005 at Aro Khalding Tsang, are representations of the elements. The cone shaped body represents fire. On the front of the body are two circular discs – the larger white disc represents water, and the smaller yellow disc represents earth. The crescent shape piece at the top symbolises the air element, and the circle above this the space element.

The tormas made at this retreat were intended to be able to survive outside and withstand all weathers. They were made from a coarse, open clay that should cope with frost and were decorated with underglaze slips for the same reason. It would have been possible to attain brighter, more primary colours for the elemental parts of the torma using onglaze decoration and lower firing temperatures, but these would have made the tormas more fragile and susceptible to frost damage. Consequently the colours of the torma are quite earthy and merely indicate the colours of the elements.

This picture shows the small tormas in various stages of preparation prior to firing. Several coats of the coloured slip were applied to the clay body and then they received a single high temperature firing to make them as strong as stone – ready to be distributed among the sangha and during the walk across Cadair Idris.