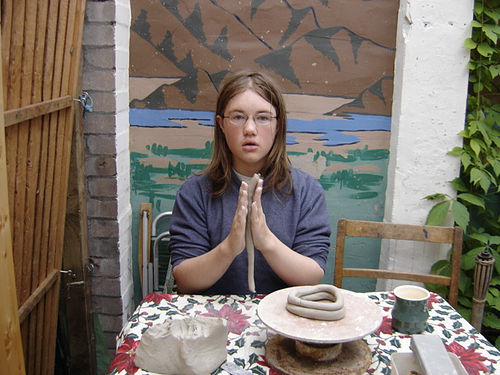 This photograph shows Ngala Nor’dzin and Ngala ’ö-Dzin’s younger son Richard making tormas out of clay. During the craft retreat Richard made eight tormas of various sizes, plus one hundred and eleven tiny tormas. Other members of the Sangha also made clay tormas of varying sizes which were distributed at the end of the retreat to those sangha members who were involved in other activities during the week’s retreat.

‘Torma’ is the Tibetan word for the Sanskrit ‘bali’ which can be translated into English as ‘offering cake’. ‘Torma’ comes from the root Tibetan word gTor-ba which means ‘to throw or cast away, to break or scatter.’ The torma is given without personal attachment to its form, no matter how long the torma has taken to create or how special it may be. Ngak’chang Rinpoche describes torma as ‘a symbol of connectivity’. In the Aro Lineage there is always an emphasis on the five elements – earth, water, fire, air and space – in the form of torma. In the Aro gTér there is very little Mahayoga ritual, so torma are simple and non-elaborate. They are made and offered as part of the ordination ceremony in the Aro Lineage. They are made out of marzipan or tsampa and eaten by all those present after the ceremony as a symbol of the connectivity of the Lama, yidam, khandro/pawo.

Richard is making this torma out of coils of clay. Some were made by pinching the clay into shape, and one really large torma was made using slabs of clay. The tormas that were made on the craft retreat were simple representations of the elements: a conical body coloured with red iron oxide slip represents the fire element; two circles on the front are decorated with white and yellow slip for water and earth; and a crescent shape painted with green slip for air is topped with another circle of blue for space.