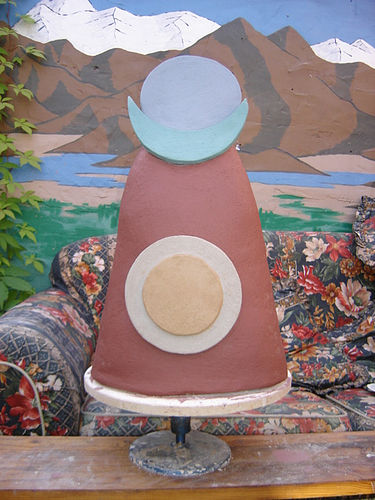 This large torma was made out of clay coils – in the same manner as the smaller tormas. The size of this ceramic sculpture – as large as was possible to fit in Ngala Nor’dzin’s kiln – made it heavy and difficult to move around. It had to be lowered gently into the kiln using two straps – similar to a coffin being lowered into a grave.

Two of these large torma were made. They were made directly onto a kiln shelf so that we were sure that they would fit in the kiln, and the height checked regularly. The first was coiled, but unfortunately this one exploded in the kiln. The large volume of air inside the torma could not escape quickly enough as it expanded in the heat of the kiln. A second torma was built – this time out of slabs of clay. A hole was made in the top behind the circle of space, and one corner at the base was cut back to allow another place for gases to vent. Consequently this one fired more successfully though there was still a little cracking along the seam lines. These will be filled and coloured to match the ceramic body before sacred syllables are painted on the torma in gold.

In this picture the large torma is sitting on a bench in the loggia at Aro Khalding Tsang. Behind it can be seen the wall frieze that Ngala Nor’dzin painted a few years ago. The loggia – converted from an old and unused garage – is a valuable space during retreats at Aro Khalding Tsang, serving as dining room and craft area.