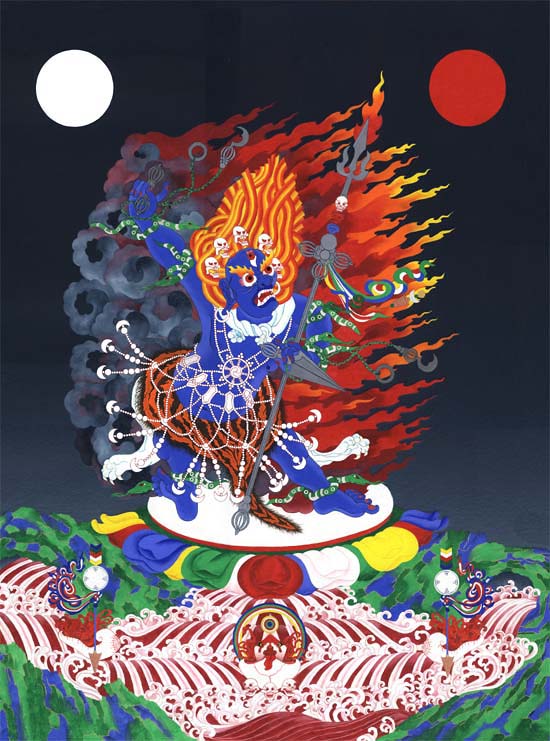 the lion-voiced Lama who obliterates mikha

This thangka was painted by Khandro Déchen Tsédrüp Rolpa’i Yeshé. It depicts Padmasambhava in one of his eight manifestations as Vajra Guru Seng-gé Dradog – the Guru with the Voice of Lion. Here we see Seng-gé Dradog according to the Aro gTér, in which he holds a noose in each hand rather than one in his left hand – as does the standard form. He also holds a phurba in the left hand and carries an iron khatvangha incorporating nine-prong vajras. None of the Aro gTér wrathful yidams are depicted wearing the 52 severed heads and none trample corpses – but in all other respects this form is the same as the forms of Seng-gé Dradog found in other traditions. Seng-gé Dradog is a powerful means of obliterating mikha – the depravity of twisted communication which—in its fundamental form—is the heresy of duality.

This thangka was painted by Khandro Déchen according to the painting system devised by Ngak’chang Rinpoche. The style is based on several Tibetan thangka painting styles—including Karma Gadri—in which he was trained during the 1970s. The style is not an ethnically Tibetan style, but rather one which emphasises Vajrayana in terms of the nature of the yidam being a body of coloured light. According to Vajrayana, the envisioned yidam is comprised of the light display of the five elements and therefore this style is traditional according to the drüpthab of the yidam rather than traditional according to the Tibetan cultural systems of thangka painting.