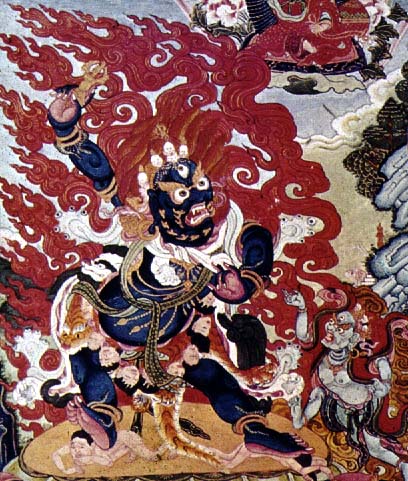 The Eight Names of Padmakara: The Lion Voiced Manifestation

Seng-gé Dradog (bLa ma seng ge sGra sGrog) is the Lama with the voice of a lion. The voice of the lion is a self-existent proclamation. The roar is not a threat because there is no doubt about what it means. Threats only have to be made when there is doubt. The lion’s voice proclaims the non-dual state as reality and all who hear it know it for exactly what it is. Seng-gé Dradog is dark blue in colour –symbolising the vivid dimension of space. He wears all the heruka (Traktung – khrag ’thung) ornaments in display of his power to transform every vestige of negativity in whatever form it takes – no matter how violently deranged. He holds the golden vajra which subdues all malignant motivation and the vajra snares which trap all dualistic manipulations. Seng-gé Dradog’s main characteristic is as the force which destroys the four philosophical extremes. He counteracts the degraded delusional mind which slanders the Lama in order to remain in the prison of duality.