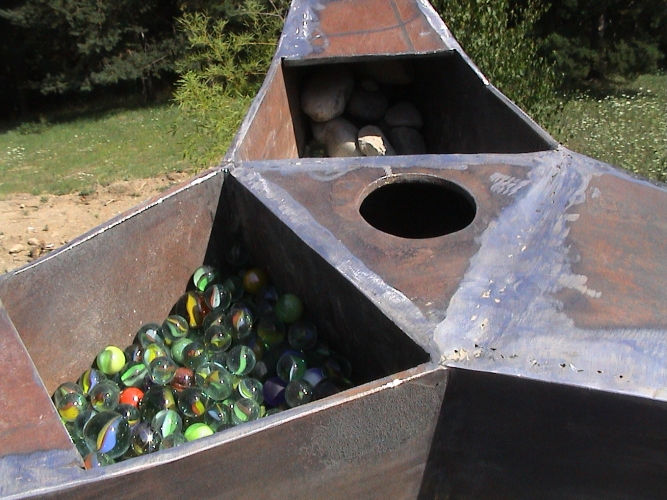 Assembly and installation – erecting the blades

On the eighth day, all the steel work of the phurba’s various parts was completed. The blades were carried to the construction site again and set into the cone, formed by the steel sheath in the centre of the triangular phurba stance. It was an impressive moment seeing the phurba’s point gliding into its sheath, accompanied by the sonorous sound of sliding steel.

Ngakpa Trögyal controlled the inclination of the blades once more and adjusted the position of the blades slightly. He and George filled up the space between the sheath’s walls and blades with low-density concrete.

Ngak’chang Rinpoche and Khandro Déchen performed the rabné – the filling of the blades with sacred materials. Ngak’chang Rinpoche placed within the phurba a small quantity of gold and silver, along with his own gZi stone and a turquoise given to him by Zilngön Lingpa – Khordong gTérchen Tulku Chhi’mèd Rig’dzin Rinpoche.

All the workers sat in silence near the Phurba whilst Ngak’chang Rinpoche and Khandro Déchen performed the rabné. Although the sky had been mercilessly clear during the whole week, a slight veil of high clouds surrounded the sun just during this ceremony and a vivid perihelic arc was clearly visible. After the rabné the ‘windows’ at the blades’ base were sealed with steel sheets welded tightly onto the upper section of the blades.