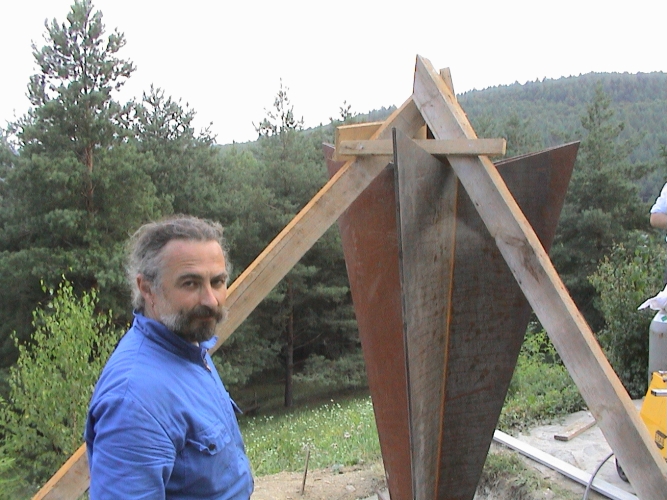 The trial run of setting the blades into the base

Whilst the welding team was working on preparing the blades, three apprentices prepared a huge wooden tripod and basic scaffolding for setting up the blades the first time. Nine apprentices had to carry the blades from the forge house to the construction site.

When the blades (with the steel sheath sitting on the phurba) were set up for the first time, the phurba’s point engaged into the steel tube’s open end, sticking out 3 inches into the concrete base. The tripod building team now joined three props, which were immediately nailed together and fixed into position to form a secure support for the blades.

Ngak’chang Rinpoche and Khandro Déchen finally advised on the orientation of the phurba’s blades, and they were turned accordingly. The very top corners of the ‘edge reference points’ were plumbed on to the concrete base’s surface to set up a first orientation of the triangular stance.

The next step was the laying the concrete base so the blades had to be removed. All hands were needed to dismantle the wooden tripod, to remove the blades from their sheath, and to bring the blades back to the forge house, where steel work continued.