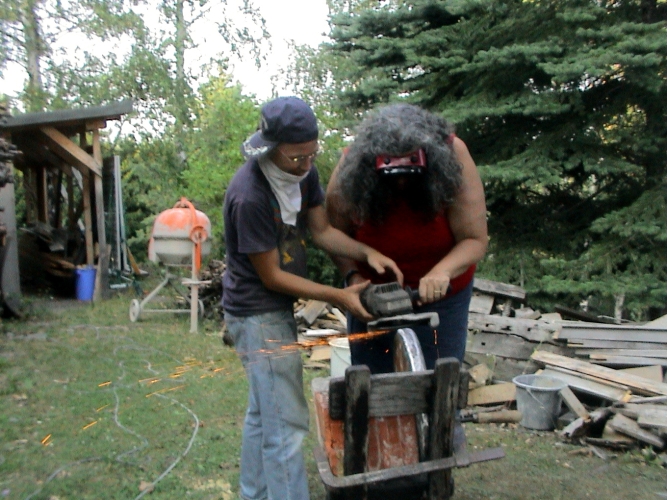 Preparing the parts for the Vajra ornament

The next day a group of six brave apprentices gathered together around three heavy grinding wheels. Ngakma Shardröl had a go as well. They began to grind the nine prongs for the vajra, and the edges of the two heavy, 2 inch thick steel discs, which would become the base of the lotus and prongs respectively. The grinding work took three full days.

The central prong of the vajra was made from a solid block of steel, and the eight curved prongs were cut from steel rings. The grinding work was quite extreme in the scorching summer sun, with the thermometer hovering around 100° again. Sparks from the grinding wheels shot out in showers over three yards in length. At one point the garden of Ngakpa Trögyal and Naljorma Dzü’drül caught fire, ignited by the grinding sparks. Only due to the brave and quick reaction of an ex-firefighter apprentice was a wildfire avoided. The overalls of the workers frequently caught fire and had to be quickly extinguished. Fortunately no one was burnt despite these difficulties.