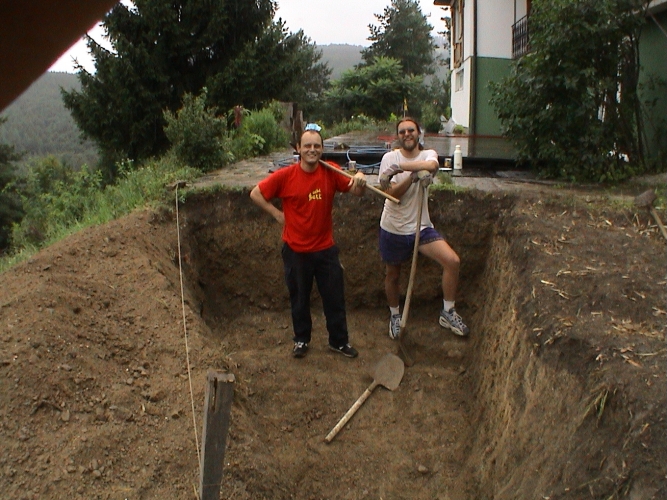 The foundations were excavated on the first day of the retreat. A hole 9 foot by 9 foot and 5 foot deep, was dug out at the area appointed by Ngak’chang Rinpoche. The place for the phurba is close to the dance floor, where phurba gar’cham usually is performed, in front of Khyungchen Ling gompa.

After the excavation was finished, roughly 250 cubic feet of gravel was shovelled into it to form a layer about 3 feet deep, serving as a decent base for the concrete foundations and drainage.

Ngak’chang Rinpoche pointed out the exact central point of the gravel surface area, which would become the anchor point of the phurba. A steel tube was hammered into the ground, through the gravel, so that only about a third of its length remained visible above the gravel line. The phurba’s point would sit in the opening of this steel tube later, but it was closed with heavy plastic tape initially to prevent it from being filled with concrete during building the foundations.

On the next day the concrete foundation for the phurba’s stance was laid. On top of the gravel a layer of plastic film was laid out, on which the reinforcement for the concrete base was set up. For this 18 steel rods, ½ inch thick, each 8 feet long were used, laid out in a netlike structure to cover the entire excavation area.

To build the concrete base for the phurba, eighty cubic feet of heavy duty concrete was poured into the excavation. After a layer of one foot thick, even concrete had been laid, Ngak’chang Rinpoche, assisted by Ngakma Shardröl Du-nyam Wangmo, empowered the foundation for the phurba by casting 30 high velocity life rifle cartridges into the base’s concrete.