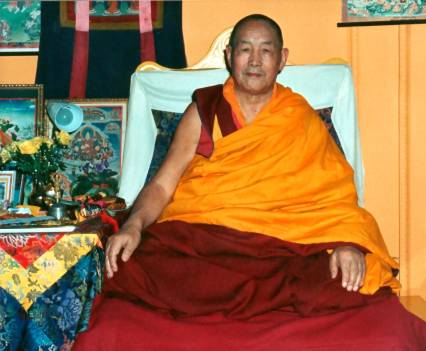 Ngala Nor’dzin comments:
I remember the sense of the weekend being of vital importance in my life as a practitioner, as if the stakes had been raised somehow. And they were – in ways I did not realise at the time.

Ngala Nor’dzin comments:
Ngak’chang Rinpoche and Khandro Déchen enabled us to incorporate these practises seamlessly into the Nyingma structure we were to follow and enabled us to fulfil our ngöndros based on these practices in conjunction with the Düd’jom gTérsar. Pema Gyaltsen Rinpoche was an awe-inspiring Lama. We did not find him as ‘approachable’ as many of the Lamas we had met at the Lam Rim Centre. He had an extraordinary quality of presence, power, and calm, which made us feel a little over-awed. After we had engaged in preparatory practice for the empowerment however—and before we received empowerment the following day—he was happy to answer our questions, and put us at our ease. We were later able to ask Ngak’chang Rinpoche many questions concerning Vajrayana which had remained unanswered through lack of time – and were surprised to discover that Ngak’chang Rinpoche received a great deal of teaching within the Gélug tradition. We were thus able to understand the context of practice and to understand the similarities and differences between the traditions. Ngak’chang Rinpoche has received teachings from all the Traditions of Vajrayana – Nyingma, Kagyüd, Sakya, Gélug, and Bön and has great respect for all. He has pointed out on numerous occasions that the most important aspect of Vajrayana is devotion to the Lama and the maintenance of vows. In receiving many teachings and empowerments from many lineages the way to maintain pure samaya is to follow the instruction of one’s Tsawa’i Lama. Without a Tsawa’i Lama one has to maintain every commitment separately – but when one has a vajra master – it is he or she who orchestrates one’s practices and thereby enables the student to fulfil all vows.