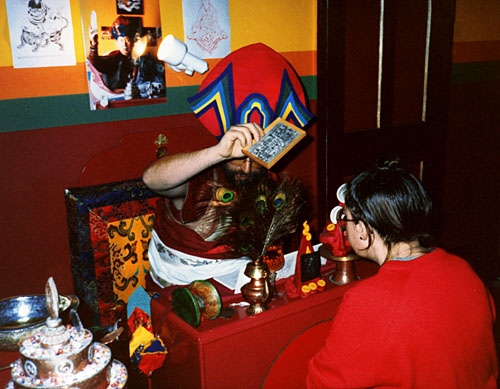 A key part of the ordination ceremony within the Aro lineage is empowerment with the implements of a tantrika. These implements include an array of wrathful implements such as phurbas, swords, lances, axes, spears, flaying knives, daggers. Ngak’chang Rinpoche says of these implements, that can be seen in images of wrathful yidams:
The weapons held by wrathful yidams destroy the illusion of dualism. There are swords, lances, axes, spears, flaying knives, daggers – a vast array. It is not that dualism has to be destroyed in all these different ways, simply that we all need different ways to destroy our individual illusions of duality. Our illusions take many different forms; so, paradoxically, many illusory methods are needed to destroy illusion. At the ultimate level, the weapons held by wrathful yidams all perform the same function; whether it is a spear, a lance, or a dagger – duality is murdered.

In this picture Ngala Nor’dzin is still wearing her ordinary day time clothes. At a certain part of the ordination ceremony Ngala Nor’dzin left the room and changed from her ordinary clothes into her new ordination robes. On her return to the shrine room her day clothes were stabbed symbolically by Ngak’chang Rinpoche with a phurba, to illustrate that Ngala Nor’dzin had died and been reborn into her new life as a ngakphang practitioner.
Ngala Nor’dzin remembers; This was one of the most powerful moments of the ceremony for me. To remember that moment still makes the hair rise on the back of my neck.

Ngala Nor’dzin recognised the death of her old self in terms of bardo practice, where we continually dwell in the awareness that we die and are reborn on a moment by moment basis. Ngak’chang Rinpoche says about bardo practice: Continuity is form. Discontinuity is emptiness. We are approaching non-duality through increasing the quality of discontinuity. We’re making life totally discontinuous. There’s escalating disjuncture. Disjuncture every second. The moment gets smaller and smaller and smaller, until all sense of continuity collapses into itself. And this point, at which all continuity is destroyed, is called tha-shé bardo, or tha-mal-gyi-shé-pa bardo. Tha-mal-gyi-shé-pa bardo is actually the fruit of the gYo-wa bardo. As I said, tha-ma-gyi-shé-pa means ‘instantaneous ordinariness’. As soon as continuity is destroyed, it appears again as the continuous moment of ‘Great Time’. One is continuous again, but that which is continuous is empty. One arrives at the non-dual point of realising the one taste of continuity & discontinuity. This is the essence of the tha-mal-gyi-shé-pa bardo: simply noticing death – and being in the next moment. With the practice of tha-shé bardo, one doesn’t have to do anything at all… apart from live as one would otherwise live. It’s a practice of total integration. There’s no aspect of life with which one has to ‘do’ anything. Every moment of life is practice. There is no time when one is not practising [laughs] apart from when you’re not practising that is, if you’re no longer aware of disjuncture. It is a practice of recognising disjuncture, until disjuncture becomes so rapid that it disappears into itself and becomes continuity.