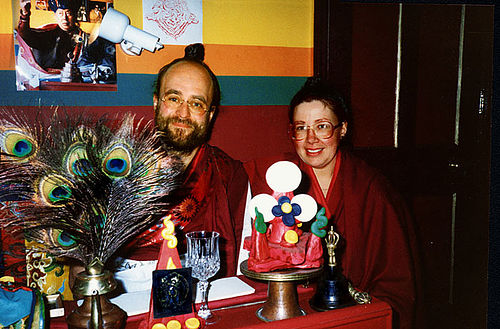 This picture was taken on completion of the ordination ceremony, and Ngakma Nor’dzin is wearing her robes for the first time. At this time Ngala Nor’dzin wore a red shamthab rather than the white shamthab of the gö-kar-chang-lo. At this time – and at the time of Ralzhig Pema Legden and Ngala ’ö-Dzin’s ordinations – Ngak’chang Rinpoche gave a novice style of ordination and practitioners held the title of ‘Ngakchung’ (sNgags chung), which means ‘little Ngakma/Ngakpa.’ This style of novice ordination was briefly employed by the lineage as a transitional phase between apprenticeship and full ordination and vajra commitment. Ngak’chang Rinpoche offered ordination in this way in the early days of his teaching, when he felt that apprentices’ understanding of the Fourteen Root Vows was immature. Once a group of committed and devoted apprentices had formed around Ngak’chang Rinpoche and Khandro Déchen, they were able to teach on the Fourteen Root Vows and establish that the implications of entering vajra commitment were fully understood. Thereafter all ordained practitioners received full and ordination and wear the white skirt of the gö-kar-chang-lo. The full display of the ornaments and accoutrements of the gö-kar-chang-lo’i dé (gos dKar lCang lo’i sDe), including the white skirt and uncut hair, all symbolise aspects of the Root Vows.

The role of the vajra master is not well understood in the west and where it is understood it is often rejected. Commitment to the Lama and keeping the root vows is central to the practice of Vajrayana. Without the vajra master, Vajrayana practice becomes meaningless imagination. If there is no vajra master, there is no transmission of the experience of the yidam. Previously the root vows were inaccessible to those who had not received transmission, but nowadays they can be read about in books. Since they have become so widely available, Ngak’chang Rinpoche and Khandro Déchen have started teaching all their apprentices about the root vows. In recognition of their devotion and the stability of their practice, Ngala Nor’dzin, Ngala ’ö-Dzin and Ralzhig Pema Legden were given the full gö-kar chang-lo ordination by Ngak’chang Rinpoche and Khandro Déchen and permission to wear the white shamthab and symbolic ornaments.

Maroon is the colour that is generally seen worn by practitioners of Tibetan Buddhist Lineages. However symbolically, the true colour should be red rather than maroon. Red, with blue and white, represent the colours of the rTsa rLung channels. Maroon became the prevalent colour in Tibet because of the lack of available dyes that could produce a true red. Khyungchen Aro Lingma encouraged a return to the true red of symbolism, and this is the colour that is now worn in the waistcoats and shawls of the Aro Lineage.