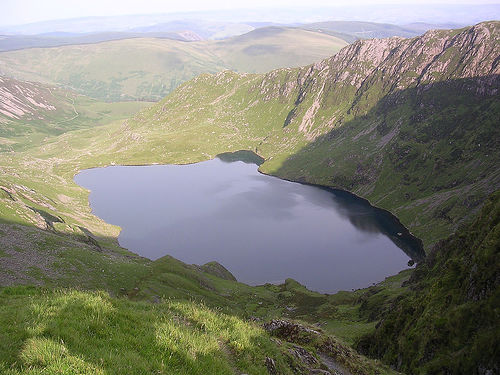 At last the party arrived at the peak of Cadair Idris, and after a short scramble down a rocky ridge, we were blessed with the view of Llyn Cau. This is the third and largest of the three lakes of Cadair Idris, and it is almost completely encircled by the rocky ridge from which this photograph was taken. This is the lake we had visited the previous year (2004) at the end of the craft retreat to make the Khyungchen Aro Lingma appliqué.

At this point we split up into two groups. Most of the walkers continued as intended on the path around the edge of the ridge, which would eventually arrive at the far side of Llyn Cau. Ngala Nor’dzin, Ngala ’ö-Dzin, their elder son Daniel, and one apprentice, who were a little behind the rest of the group, decided to take a different route.
Ngala Nor’dzin remembers: It was now well into the afternoon. We knew that the walk from Llyn Cau to the car park would take about two hours, and we were becoming concerned about the time. Also the walk along the ridge looked difficult and steep in places. I suggested that it would be possible for us to scramble straight down to the lake from this point.

We decided to let Daniel make the final decision. says Ngala ’ö-Dzin, Daniel is dyspraxic and finds this sort of walking extremely challenging. He had already coped with the steep scree with a lot of help, and we did not want to ask him to take on anything more that he felt was too difficult. He agreed that the ridge looked a long and difficult walk, and said that he would prefer to try the shorter, steeper scramble down the sheep track. The first part was quite easy, being like a gorge with plenty of hand holds on either side. After that it was mostly steep grassy slopes across which we zigzagged. In places it was very boggy

The rest of the party took the longer, less steep way over the mountain ridge. This was also not an easy path. At times it was difficult to find the route and often the surface of the path was loose and uneven. Nearly all the time on the ridge, we could see this beautiful lake, Llyn Cau. Both parties came down to the lake at about the same time but on different sides. Dusk was already falling and we were the only people there. Lama Nor’dzin and Lama ’ö-Dzin started to sing Yeshé Tsogyel mantra. The group on the other side of the lake could hear them clearly and joined in. The beautiful melody of this mantra reverberated around the mountain ridge, adding to the magical atmosphere of the lake. Then we all sat, practising shi-nè, in the empty potent silence after we had finished singing. Then without comment, we quietly arose and left Llyn Cau and the peaks of Cadair Idris.