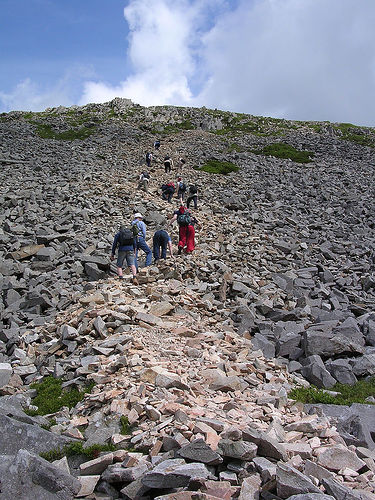 It has become a tradition over the last few years of the craft retreat in Ngala Nor’dzin and Ngala ’ö-Dzin’s sangha to end the week long craft retreat with an expedition to visit a place of special significance to the lineage, or a place that is exceptionally beautiful or challenging. We did not quite realise how challenging the walk we had embarked upon was going to be, until we arrived at the scree slope shown in this photograph. This turned out to be the most difficult part of the mountain walk. It was an incredibly steep ascent with loose stone scree. We all sat by the lake Llyn Cadair for a while, looking at the slope and marvelling at the people sliding down it. We had set ourselves the task of seeing all three lakes of Cadair Idris in one walk, and we were loath to turn back at this point, the second lake.

Ngala Nor’dzin commented:
It does look very hard, but if I do not complete this climb today, it is unlikely that I will ever tackle it again in this lifetime. I would like to carry on.

Ngala Nor’dzin and Ngala ’ö-Dzin stressed that there was no pressure on anyone to continue who did not feel able to, but that they were going to press on. In the end everyone decided that they were prepared to try it.

Ngala Nor’dzin finds hill walking quite a struggle because she sometimes has painful knees, and has to use two walking sticks on steep descents. It was inspiring to hear that she was willing to continue. We were reminded of Ngak’chang Rinpoche’s words:
That preparedness is, in itself a very powerful catalyst of spiritual unfolding. This is something that reveals the portals of a vast open dimension of relationship. It creates a sense of electricity in which the Lama is continually experienced as the doorway to an immense and unimaginable journey.

For most of the sangha members, including our Lamas, it was a hard climb. If we had been approaching this scree in the opposite direction, we do not think we could have tackled it. We believe it was marginally less dangerous to ascend than it would have been to descend. Later, we came across a tourist information leaflet that described the scree path as ‘NOT recommended’. Climbing the scree was an interesting experience, because the mind had to be focused in one place. One could not afford to let one’s mind wander at all. One had to look at where to place one’s feet step by step, and lack of attention could cause you to step on unstable scree that slid from under your feet. Everyone arrived safely, if rather exhausted, at the top, and were rewarded with a fantastic, panoramic view and a relaxing little picnic. Once we had all recovered somewhat, we practised integrating with the air element for a while on the windy ridge, before recommencing walking to the third lake, Llyn Cau – the lake we had visited the previous year.