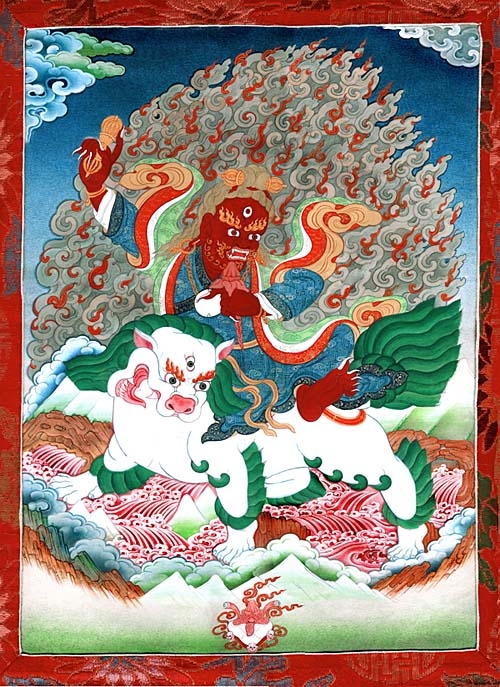 Damchan Dorje Legpa (dam can rDo rJe Legs pa) means ‘oath-bound benign thunderbolt’. This form of Dorje Legpa is particular to the Aro gTér lineage of the Nyingma Tradition of Tibetan Buddhism where he appears in a form which closely resembles his Sanskrit name of Vajra Sadhu – the indestructible practitioner. His feet are naked and he wears his hair in a yogi’s topknot wrapped around a nine-prong vajra. He wears the blue gown of the tantrika and he is the colour of Dorje Tröllö – the form of Padmakara who subdued him to the service of Dharma.

This exquisite thangka of Aro Damchan Dorje Legpa portrays one of the three forms of Dorje Legpa within the Aro gTér Lineage. This thangka shows the form which rides a snow lion. The second form rides a goat and wields a hammer and bellows. The third form is Dorje Legpa as yidam – a long bearded manifestation of Padmasambhava who sits on a goat skin and has the appearance of a yogi.

Khandro Déchen says of this thangka:
This is a particularly beautifully painted thangka of the Aro gTér Dorje Legpa – although the detail is not quite iconographically exact. The nine prong vajras in his hair and held in his hand should be depicted as meteorite iron rather than gold. Likewise the chain which suspends his mélong. Although there are various forms of Dorje Legpa, they are all quite similar. Some ride the Snow Lion and some are mounted upon a goat with twisted horns.

Ngak’chang Rinpoche comments:
This form which rides a snow lion is the ‘majestic yogi form’ who rides the vast tracts of sky beyond the mountain peaks – the space which is symbolic of Wang-thang (dBang thang) ‘the field of power’. The snow lion represents youthful energy – a type of power which is enlivened by humour. The humour of the snow lion is the non-dual humour which transcends seriousness and non-seriousness. There is a wide awake, wide open, wide-eyed quality to the youthful ‘emotional astuteness’ of the snow lion. The snow lion carries Dorje Legpa on her back in a graceful yet precise manner – not needing to be ‘swift to the kill’ with regard to tracking down our deviousness with regard to our vows. The snow lion mount, simply allows Dorje Legpa the space of vajra-humour in which all deviations are ‘hoist on their respected petards’. Neuroses simply run from the gaze of the Dorje Legpa and his snow lion until they exhaust themselves. This is their wang-thang – their field of power.

The form of Dorje Legpa shown here is without a hat. He wears his hair in yogic style, wrapped around a nine-pronged vajra. He also carries a nine prong vajra in his right hand. He wears the blue gown of a tantrika; the red, white, and blue ngak’phang shawl of the gö-kar chang-lo’i dé (gos dKar lCang lo’i sDe); and, a mélong hangs at the level of his heart. The mélong is a symbol of his function as a protector of the Dzogchen teachings of the Aro gTér Lineage. The mélong is the quintessential symbol of Khyungchen Aro Lingma the discoverer of the Aro gTér. In his left hand he holds the ripped out heart of justification. The heart-blood of justification needs to spilled in order that compassion can function. The state of mind of a vow-beaker, is one which is mainly characterised by the need to justify every act of dishonesty and unkindness in the guise of ‘honour’. Vow-breakers often ironically present themselves as ‘people of honour’ – and at these times Dorje Legpa can be called upon to spill the heart blood of that illusion – if the vow-breaker has the courage to remember his or her vows.

Ngak’chang Rinpoche comments:
He is the ‘Benign Thunderbolt’ – inasmuch as his practice allows the yogi or yogini immense space in which to re-discover authentic practice. Dorje Legpa soars in space over a raging sea of blood. The sea of blood is the haematological cauldron in which all excuses for lack of compassion drown. The concept of being oath bound, is perhaps a difficult one for many people at this time of the world and particularly in the West. We generally prioritise ‘process’ over ‘promise’ and do not like to feel ultimately bound by anything. If we have this view, then any form of protector practice is not only meaningless – but highly dangerous. Beyond question of how practitioners keep their vows however, we should look at how the nature of terrific power can be confined in such a way as to serve beings. Have many examples around us – particularly from the Industrial Revolution onward: the power of water, of wind, steam, electricity, and of nuclear fission. Whether the power of water is contained within pipes or checked by dams – it is the nature of that which contains which makes the power both accessible and valuable. Dorje Legpa is a benign thunderbolt – the charge which reminds us of our vows. Dorje Legpa provides the mild electric shock of freshness when our practice is in danger of becoming stale. Speaking as one who has been struck by lightning twice, even though the charge was mild and peripheral I can attest to the sense in which I felt terrifically alive afterwards. On each occasion I was reminded of Dorje Legpa – the benign thunderbolt. Dorje Legpa is the one who is capable of dealing death, but who instead deals a shock. The possibility of death is there as a reminder.