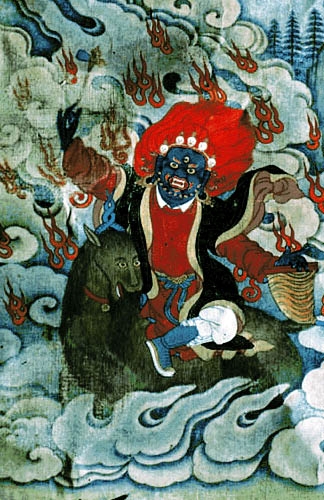 Garwa’i Nagpo Damchen (gar wa’i nag po), a form of Dorje Legpa, is holding a vajra hammer in his right hand, and tigerskin bellows in his left. Dam chen means oathbound. Dorje Legpa is very much a character like Thor in Western mythology, and often has the accoutrements of a blacksmith. The association with blacksmithing is an important symbol for the gö-kar-chang-lo, or householder lineage. Blacksmiths were socially looked down upon in Tibet, but here we have a blacksmith who is a realised being and protector of Dharma. In this form he does not wear a hat and rides a goat. The twisted horns—clearly visible in this image—are a symbol of non-duality.

Pema Lingpa was also a blacksmith. He had an iron shawl, that was so heavy that it took two monks to pick it up. Kyabjé Chhi’mèd Rinpoche was the son of a blacksmith.