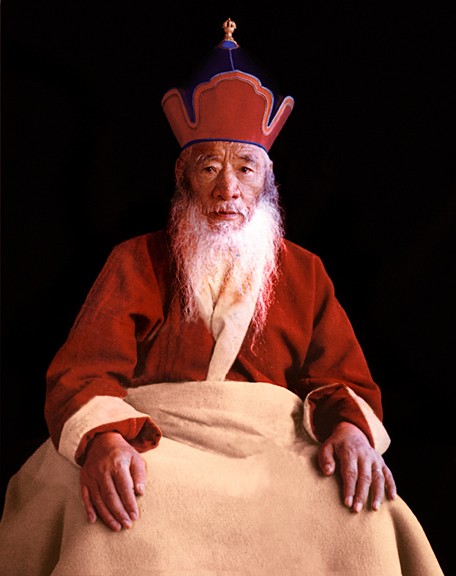 Kyabjé Chatral Sang-gyé Dorje Rinpoche was born in 1913 into the Ab-sé Clan of the Nyarong region of Kham, and then journeyed to Amdo to live. This is the same Clan to which Kyabjé Künzang Dorje Rinpoche belongs.

Chatral Rinpoche’s Tsawa’i Lama was Kathog Khenpo Ngawang Palzang Rinpoche. From him Kyabjé Chatral Rinpoche received the Longchen Nying-thig. He received teachings from Dzongsar Khyentsé Chökyi Lödrö Rinpoche. He was one of the heart disciples of Kyabjé Düd’jom Jig’drèl Yeshé Dorje Rinpoche (the incarnation of the gTértön Ga’wang Düd’jom Lingpa).

Kyabjé Chatral Rinpoche left his family at the age of fifteen and travelled extensively in order to practise and receive teachings. He spent many years in solitary retreat in caves and is renowned as a realised ngakpa. He always travelled by foot – declining to avail himself of horses when they were offered. He took shelter in tents rather than accepting the hospitality of wealthy patrons. Today he lives in his own small dwelling in Yang-lé-shöd in the Kathmandu Valley of Nepal – close to the retreat caves sacred to the memory of Padmasambhava and Yeshé Tsogyel. He continues to eschew—as has always been his conviction—involvement with politics and bureaucratic monastic institutions and lives as a simple hermit. Nonetheless, he has many disciples throughout the Trans-Himalayan regions and in the West. Even in his nineties Kyabjé Chatral Rinpoche travelled widely in the Himalayas in order to give transmission and teaching.

Ngak’chang Rinpoche met Chatral Rinpoche in 1990 when he was granted an audience with him in the company of his friend Gyaltsen Rinpoche. Ngak’chang Rinpoche recounts of this meeting:
Chatral Rinpoche was most kind in expressing appreciation of the work in which Khandro Déchen and I are engaged with regard to establishing the gö kar chang lo’i dé (gos dKar lCang lo’i sDe) in the West and working to support and propagate it in the East. We talked of my connection with Khordong gTérchen Tulku Chhi’mèd Rig’dzin Rinpoche and of my studies with him. Being in the presence of this profound Nyingma Master was a wonderful opportunity for me – and I hope to meet with him again one day. Chatral Rinpoche was evidentially concerned with nothing apart from practice and those who practised. Whenever anyone’s name was mentioned by Gyaltsen Rinpoche – his responses were always couched as appreciation for their seriousness of practice rather than for works they had accomplished.