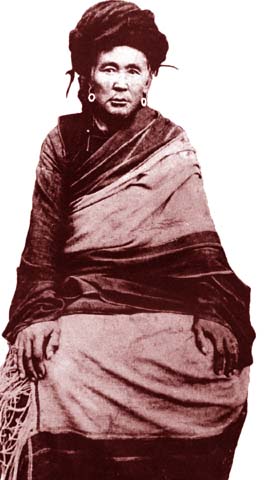 A great ngak’phang Lama of the Drukpa Kagyüd School

Ngakpas and ngakmas are also found in the Sarma (gSar ma) or New Translation Schools – particularly the Drukpa Kagyüd and Drigung Kagyüd schools – these are the two Kagyüd Schools which are closest in style to the Nyingma tradition. A’pho Rinpoche was the grandson of the extraordinary Drukpa gTértön, Shakya Shri. After the exodus from Tibet, A’pho Rinpoche established a yogic retreat place in Manali in the Kulu valley of Himachal Pradesh, Northern India. This became known as the A’pho Rinpoche Gompa, and since the death of A’pho Rinpoche in the late 1970s the Gompa has been presided over by Gégen Khyentsé Rinpoche.

The current lineage holder is Sé Rinpoche, a vital and charismatic young Lama of whom Ngak’chang Rinpoche says: Sé Rinpoche offered me profound teachings on the nature of fear by inviting me on frequent occasions to ride pillion on his motorbike. Sé Rinpoche is recognised as the incarnation of A’pho Rinpoche’s father, who was also a ngakpa.

A’pho Rinpoche wears the red, white, and blue striped shawl of the ngak’phang tradition. He wears conch yogic earrings, displays the Zur phud yogic manner of wearing his hair in matted coils, and the yogic waistcoat of a naljorpa. On the 1992 Confederate Sanghas of Aro pilgrimage to Lahaul, Zanskar, and Ladakh, A’pho Rinpoche’s son Kushog Jampal-la organised our journey with the help of a team of the Gompa’s practitioners. The pilgrimage took in all the Drukpa and Nyingma Gompas on the route between Manali and Leh (the main town of Ladakh). Ngak’chang Rinpoche and Khandro Déchen gave teachings almost every evening of the pilgrimage and on auspicious days they gave empowerments which were often attended by the local people in the villages through which they travelled. They spent several days practising at the site of one of the Eight Great Charnel Grounds of ancient India and were received at Sani Gompa, where they performed an empowerment of Yeshé Tsogyel.

A number of apprentices accompanied Ngak’chang Rinpoche and Khandro Déchen on this pilgrimage. Crossing the Shing-go La pass an Indian pilgrim from another party died of altitude sickness and Rinpoche was fortunately at hand to perform Phowa for him. Many wonderful situations occurred and Ngak’chang Rinpoche and Khandro Déchen remarked:
We are all blessed by the continuing inspiration of Shakya Shri and by the undoubted presence of A’pho Rinpoche. That A’pho Rinpoche’s son Kushog Jampal la is here with us is more than you might imagine. The lineage of A’pho Rinpoche and the lineage of Khyungchen Aro Lingma are very similar in some respects – they are both dag-ngang gTér – both pure vision gTérma. Shakya Shri received his gTér from Milarépa, and Khyungchen Aro Lingma received hers from Yeshé Tsogyel.

A’pho Rinpoche had an unassuming manner, which belied his importance as a realised Master – but all those who knew him understood that his power of transmission was remarkable. Many said of him that he was the living presence of Milarépa.