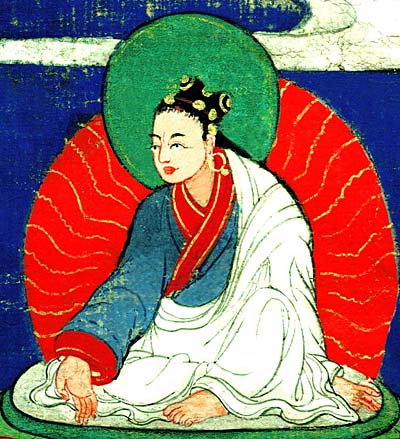 Khandro Chenmo Yeshé Tsogyel is shown wearing the royal golden ornaments of the Princess of Karchen – in token of the first of the eleven nam’gyürs or demeanours (nam’gyür chu-chig – rNam ’gyur bCu gCig), the nam’gyür of nobility (rGyal mo rNam ’gyur).

Ngak’chang Rinpoche comments:
The nam’gyür of nobility is one in which we manifest ‘noblese oblige’ – the obligation of nobility to act in a beneficial way toward others. As a tantrika one is the lord or lady, king or queen, emperor or empress, of the field of the senses – and as such one has infinite resources which are there for the benefit of others. As a tantrika one is a nascent teacher, one who ascends to the throne of monarch in order to become the servant of all beings. The one who pursues his or her own advantage at the expense of others is devoid of true nobility.

According to the Aro gTér, the Fourteen Root Vows have sections relating to body, speech and mind, and the eleven nam’gyürs are associated with the vows of body. According to the many different lineal systems through which the gö-kar chang-lo ordination is given, there are many different sets of branch vows which relate to ngakpas and ngakmas, répas and rémas, togdens and togdenmas, naljorpas and naljormas.

With regard to the nam’gyürs, Ngak’chang Rinpoche commented:
Nam’gyür or demeanour should be understood to include a range of meaning inclusive of, but not contained by: bearing, appearance, behaviour, fashion, composure, posture, presence, style, deportment, presentation, countenance, expression, comportment, mien, carriage, manner, trend, faculty, proclivity, conduct, disposition, and stance. Demeanour is a physical sense and a way of being in the world which provides its own communication – both outwardly and inwardly.