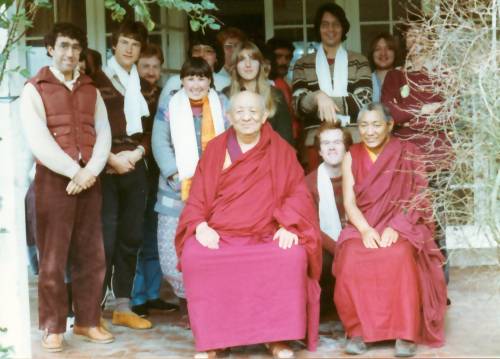 His Eminence Tsenzhab Sérkong Rinpoche visited the Lam Rim Buddhist Centre several times during the years that Ngala Nor’dzin and Ngala ’ö-Dzin were involved with the Centre. This picture was taken during a visit in October 1982.

Ngala Nor’dzin comments:
Sérkong Rinpoche was already quite old and not very strong when we met him. One of the things I remember most clearly about his visit was the joyful affection between him, his attendants and Geshé Damchö Yönten. I think that seeing the way they interacted with one another gave me my first understanding of devotion. They demonstrated such pleasure in one another’s company and were always laughing. Geshé Damchö was deferential to his elderly teacher, but in an extremely natural, open-hearted manner. He was completely non-self-oriented in Sérkong Rinpoche’s presence.

Ngala ’ö-Dzin continues:
One evening during his visit a number of practitioners circumambulated the Lam Rim Centre chanting a Tsongkhapa practice for several hours. Sérkong Rinpoche sat on the high throne in the shrine room with the windows open. As we passed the windows, he smiled out at us benevolently.

On the far left of the picture is Alex Berzin who was acting as translator for Sérkong Rinpoche. Ngala ’ö-Dzin is kneeling to the right of Sérkong Rinpoche, and Ngala Nor’dzin is standing behind him wearing a katag. His Eminence Sérkong Rinpoche died in 1983 and his rebirth was discovered in 1984.