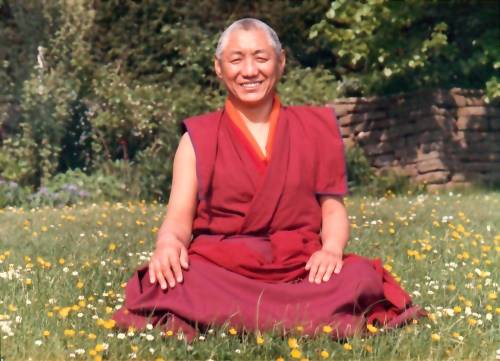 Geshé Damchö Yönten (dGe bShes dam chos yon tan – Geshé virtuous teacher; Dam-chö – sacred teachings; Yönten: enlightened qualities) is the spiritual director of the Lam Rim Buddhist Centre in Raglan, Wales. This was the centre that Ngala Nor’dzin and Ngala ’ö-Dzin attended during their initial period of commitment to Buddhism and it was there that they first became friends in 1980.

Geshé Damchö became a monk of the Gélug School at the age of six and entered the monastic university of Drépung. He studied Buddhist philosophy, psychology, logic and debate, scriptural texts, and the practice of meditation for twenty three years, attaining the qualification of Lharampa Geshé – the highest Geshé degree. In 1959 his life of monastic study and practice was disrupted by the Chinese invasion of Tibet, but Geshé Damchö was able to continue his studies in India and Ladakh after his escape. He was Abbot of Samten Ling Gompa Norba in Ladakh for six years, before returning to India.

Geshé Damchö first came to Britain in 1976. Ngak’chang Rinpoche knew him at that time and they became friends. Ngak’chang Rinpoche also became friends with his sponsor – a western Kagyüd nun called Tsultrim Zangmo. Ngak’chang Rinpoche invited Geshé Damchö to teach in Wales on several occasions during the mid 1970s and it was through these visits that he met the disciples who helped him found Lam Rim Buddhist Centre in 1978. Tsultrim Zangmo and her mother Ani Wangmo sold their house in Bromley (as did a group of other students) and together they bought the house in Raglan which became a home for Geshé Damchö and as a place of study, practice, and retreat. Tsultrim Zangmo also lived at the centre with her mother, who had also taken monastic ordination from Gyalwa Karmapa.

Ngala Nor’dzin and Ngala ’ö-Dzin received their first refuge names from Geshé Damchö Yönten. They attended many retreats at the Lam Rim Centre over a period of about five years. These retreats were taught by Geshé Damchö, as well as by other visiting Tibetan and Western Lamas and teachers. They attended an intensive study course of Lam Rim (Graduated Path to Enlightenment) and received Tibetan language lessons from Geshé Damchö. In the early 1980s Ngakchang Rinpoche held nine retreats at the Lam Rim Centre, which Ngala Nor’dzin and Ngala ’ö-Dzin also attended.

Ngala Nor’dzin remembers Geshé Damchö as a gentle and kind man, who was always quick to laughter:
I remember attending a Happy Death Course with Geshé Damchö in which he said that people in the West did not seem to know how to be happy. He chuckled to himself and added that the Tibetan people had lost their home, their families, and suffered a great deal – yet they were a happy people.

Ngala ’ö-Dzin continues:
He was a modest man who was always ready to suggest that some other teacher was greater than himself, and could give a better answer, but he was clearly extremely learned and a great practitioner of meditation. It was thus that we came to be disciples of Rinpoche and Khandro Déchen with his blessing and encouragement. Whenever Ngak’chang Rinpoche gave teachings at the Lam Rim Centre he would always visit with Geshé Damchö at the conclusion of the retreat and they would spend some hours together. Geshé Damchö used to greet Ngak’chang Rinpoche as Heruka because of his Tantric appearance and particularly because of his conch earrings and takdröl which Geshé Damchö always enjoyed seeing.