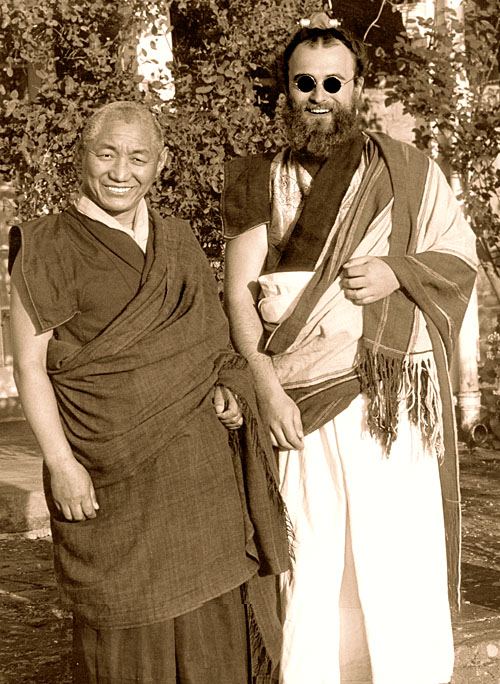 Ngak’chang Rinpoche has always been on friendly terms with Lamas of all schools – and it has always been important to him to maintain a happily non-sectarian relationship with all the schools of Vajrayana.

Ngak’chang Rinpoche points out, however, that this is not the same as Ri’mèd:
I am a practising Nyingma and although I have been fortunate enough to have received transmission from Lamas of all schools and traditions – I do not pretend to be a practitioner of Ri’mèd. The Ri’mèd masters had mastered their own traditions before they set about mastering the traditions of other schools. I simply persevere in maintaining my samayas. Having taken the advice of my Root Lamas on what I should practise and what should be set aside – I happily maintain commitments as best I can to all the Lamas I have been fortunate enough to meet in the past. That is the importance of having a Root Lama. Those without a Root Lama or those who have confusion regarding who their Root Lama may be – are bound to practise every Vajrayana commitment they have ever taken, so the rôle of vajra master in a practitioner’s life is of the utmost importance. My contact with Lamas of all schools has therefore provided me with the strongest samaya in terms of never disparaging other schools.

Ngakma Nor’dzin Pamo comments:
It was always clear that Geshé Damchö and Ngak’chang Rinpoche were close friends. They were always to be seen laughing together and I remember Geshé Damchö nicknaming Rinpoche ‘Heruka’. I remember many happy retreats at the Lam Rim Centre – even though one woman once described the multi-directional shower in ‘the purple bathroom’ as the closest thing to the freezing hells. There was always a lot of laughter there, and the residents were always kind and generous. In the early days Ngak’chang Rinpoche and his first apprentices would always travel up to the Lam Rim Centre to celebrate tsog with Geshé Damchö and his students. We were always made very welcome and Rinpoche particularly loved the tunes of the Gélug Lama Chöpa tsog.