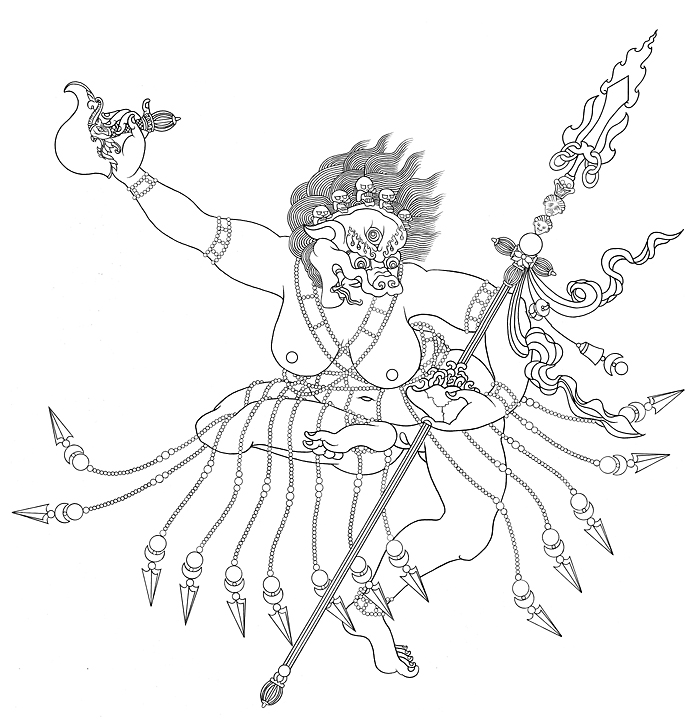 Ngak’chang Rinpoche says of this Aro gTér manifestation of Seng-gé Dongmar (seng ge gDon dMar):
There are five extremely important manifestation of Seng-gé Dongma in the Aro gTér: the Blue, Green, Red, White, and Yellow. They comprise a khyil’khor of yidams – all of whom can be practiced singly as yidams. The Red Seng-gé Dongma—shown here—is known as ‘The Corpulent Red Lioness of Maniacal Mutilation’, or ‘The Obsessed Obese Mistress of Magical Mastery’. Of the five Seng-gé Dongmas, only the Green Seng-gé Dongma is of larger physical proportions. The corporeal scale of the yidam is a symbol of powerful compassion in terms of the ability to overpower and overwhelm duality with tangible grandeur.

She slays the self-constructed ugliness of attempts to violate the copious wholesomeness of Dharma. The incensed fervour of her wild staring eyes terrorises the sordid anorexic manipulations of duality. The howling cavern of her mouth is the gargantuan expanse in which all scheming strategies are self-liberated in their arising.

Her copper hair flies upward in a billowing green blaze. She wears the wrathful five-skull crown which transforms conflicting emotions into the spectral wisdom of chö-ku; and transforms emaciated dualistic elements into the play of chö-ying. The ‘volcanic glare’ of her bountiful flame-coloured body burns away all limitations.

Khandro Déchen says:
Here, Seng-gé Dongma wears the six human bone cemetery ornaments depicted in a simplified form. The ornaments symbolise the six classes of Vajrayana. The human bone skirt draped over her powerful thighs bears ‘the 14 syllables of destruction’. When this image appears as a painted thangka, the syllables appear in the bone discs above the 14 phurbas which ornament her skirt. These syllables are the wrathful support of the 14 Roots Vows of Vajrayana, and through the shik-sé-shik sound of her swishing hips all tantrikas are reminded of their commitments. In her right hand she holds the nine-pronged lapis lazuli flaying knife. The central prong is the spatial dimension and the eight surrounding prongs are the daka and dakini of each liberated neurosis. The secret nature of her khatvangha is Khroda Padmakara – the Wrathful Lotus Master who is her ‘secret inner method nature’. She dances with great vigour—crouching and springing—in the violent yogini postures. The ruthless compassion of her dance ignites the display of unconditioned wisdom for the benefit of everyone and everything everywhere.