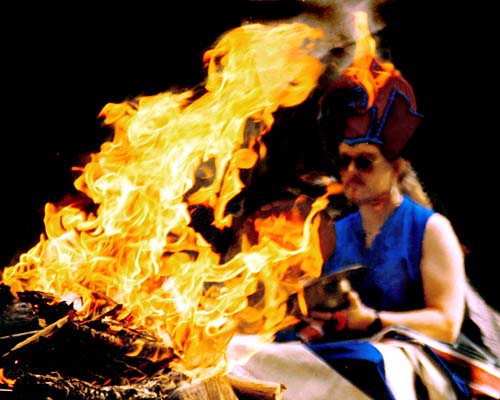 playing rolmo during a fire ceremony

Ngala ’ö-Dzin is shown playing rolmo during a fire ceremony at Pennant Valley in North Wales. For several years, week long retreats were held under canvas in a magical corner of the Pennant Valley. These retreats were the perfect opportunity and setting for teachings on the elements, living so close to the earth, the wind, the chuckling valley stream and the spectacular blaze of the hearth fire. Ngak’chang Rinpoche and Khandro Déchen taught about the colour and element system and about namkha.

Many wonderful namkha were woven during those retreats, including a huge one in the shape of an open cube, that was winched up into the roof space above the fire in the impressive roundhouse that had been built by the Spirit Horse organisation, who hosted the retreats. At the end of these retreats, when everyone had finished weaving their own namkha – or even several of them – they were burned in a ceremony to actualise the aspirations of the weaving.

Ngala Nor’dzin and Ngala ’ö-Dzin have engaged in namkha practice and presided over fire ceremonies. There are many types of namkha that can be made to work with elemental imbalances in oneself, others, and the environment. They are woven with wool on a structure of wooden batons, while visualising and reciting the mantras of Ögyen Rigna.