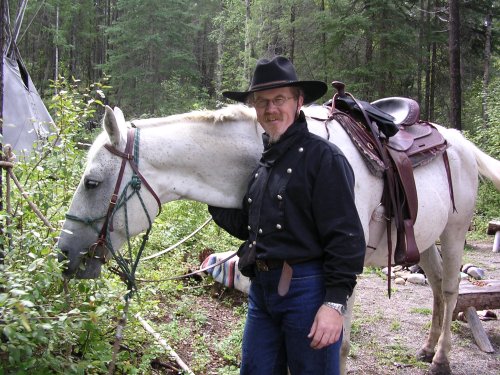 This picture shows Ngala ’ö-Dzin Tridral with a horse called ‘Guss’. The photograph was taken on a pilgrimage to the Northwest of Montana in August 2004. The Northwest of Montana was designated as the location of a ‘Hidden Land of Padmasambhava’ by Kyabjé Düd’jom Rinpoche – Jig’drèl Yeshé Dorje – and at the advice of Kyabjé Künzang Dorje Rinpoche and Jomo Sam’phel, Ngak’chang Rinpoche and Khandro Déchen set out with their disciples and apprentices to explore part of that area. Riding was an integral part of the pilgrimage – and constituted a form of practice in relation to Dzogchen.

Ngala ’ö-Dzin says:
I had taken a number of lessons in a riding school arena in Wales, and had ridden quite a few one- and two-hour treks in preparation for the Montana pilgrimage. In Montana I really valued the experience of developing an ongoing relationship with one horse. This was much more rewarding than my previous experiences in which I was always riding different horses and never grooming them or tacking up myself. The relationship with the horses grew for each apprentice through tending to their own the horse each day – including grooming and tacking up.

Ngala ’ö-Dzin developed great affection and respect for Guss – an experienced trail horse with a lively disposition. Ngala ’ö-Dzin comments:
Guss was the first horse I had ever ridden with a bit of spirit. All the horses I had been put on before tended to be rather plodding and unresponsive. Guss was much more lively – I was able to experiment with my ability to control him. He was responsive and kind, teaching me a great deal about riding in the days we shared on the trails.

Ngala ’ö-Dzin was able to practise walk, trot and canter in the corral before rides, and subsequently rode Guss on many long demanding trails through the stunning mountainous environs around Laughing Water Ranch.